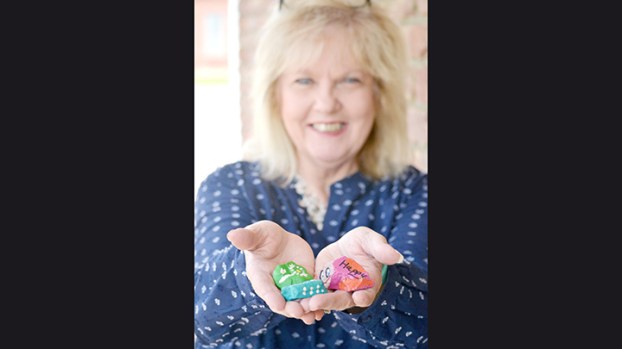 Photo by Donna Campbell Artist Debbie Adams Keene, founder of Rockin’ Ole Brook, cautions parents to be watchful of children searching for painted rocks, especially if the rock mentions a prize to be claimed.

Have fun, but be safe when rock hunting — Police urge caution

A new craze is rocking Ole Brook and with it comes a warning from police: be cautious.

The act of painting and hiding rocks is not new — its been reported in other areas for years — but it caught on in Brookhaven earlier this year and has quickly risen in popularity. At least three Facebook groups — Rockin’ Ole Brook, Brookhaven Rocks and FUMC Be Kind — regularly post photos of painted rocks that before they’re hidden and after they’re found.

“Some rocks are being painted with a dollar amount and a person’s contact information on where to claim their prize. While there have been no reports of misconduct, this carries potential tragedy for unsuspecting children,” the post read. “If a person was looking to kidnap and abduct a child, this would be an opportunity for a predator. Kidnappings, human trafficking, robbery and other criminal elements would pose danger to children just looking to claim a prize.”

In the post, police remind parents to “always tell your children not to meet strangers, regardless of the promise of money, candy, or other reward. If you must meet someone to collect a prize, have them meet you with your child in a well populated area.”

Debbie Adams Keene started the group Rockin’ Ole Brook as a way to share fun and happiness, she said.

Recently someone posted that he’d hidden rocks with dollar amounts on them and would pay the prize money to whomever found them. The man put his name on the rocks so that parents could contact him on Facebook and arrange a public meeting place, she said.

He posted a picture of himself and a young girl who found a rock with a $100 prize.

“I think that sent red flags to the police department,” she said.

Keene believes the man was genuine in his intentions, but not everyone may be on the up and up.

She suggests that if a parent finds a rock that mentions a prize from an individual, the best place to meet would be inside the police station.

Some Brookhaven businesses have hidden rocks that can be redeemed for prizes inside their business like Beyond the Rainbow and Georgia Blue. Still, children shouldn’t go anywhere to redeem rocks without a parent with them, she said.

Brookhaven Police Chief Kenneth Collins said no one has filed a complaint about the prize rocks, but the police department felt it was important to remind parents to be cautious.

“You don’t want a child to be taken advantage of,” he said. “You have to err on the side of caution. This day and time, that’s what you’re dealing with. I don’t want them to stop doing what they’re doing, just use caution.”

Collins said the rock craze is a good one because it’s getting families together to paint them and then to find them.

“I think it’s a great idea,” he said. “I think the community took to it, we just err on the side of caution. I think it’s a good thing that they’re doing and it’s fun for the kids.”

He calls it, “society correcting itself.” Only in the last decade or so has America seen a renewed interest in... read more