He had taken the preliminary SAT, scored high marks and became a National Merit Semifinalist.

Now he was in the thick of the competition for one of the nation’s highest academic honors. He had to take the SAT, submit an application to the National Merit Scholarship Corporation and write an essay on something important in his life. He sat down to write the essay, with thousands of dollars in scholarship funds on the line, and read the prompt — write about something important in your life.

So he wrote about The Inheritance Cycle, a tetralogy of young adult fantasy novels.

“I have a bad habit of writing about the first thing that comes to my mind. I looked over on my bookshelf and saw those books,” said Justin Taite Williamson, salutatorian of Lawrence County High School’s Class of 2018. “They ask a lot of philosophical questions about life and death, religion, and reading them made me grow and mature a little. It definitely did me some good, because I became a finalist.”

Williamson, 17, is a National Merit Finalist, one of 15,000 students nationwide competing for a prestigious National Merit Scholarship. He worked his way into the running with stellar grades in advanced academic courses throughout his high school career.

“I had to buckle down and sometimes make a choice between having fun and studying. I didn’t always make the right choice, either,” Williamson said. “But I knew if I worked hard enough there would be a chance to get my college paid for. That was my main goal.”

Williamson’s journey began as a junior when he took the PSAT alongside 1.6 million other students and became one of 50,000 who were commended into the program. Last September he became one of 16,000 who were narrowed down as a semifinalist, and he was named one of 15,000 finalists in February. He represents less than 1 percent of all students who entered the competition as juniors.

He is headed to Mississippi State University this August — already with considerable scholarship help as a finalist — and he could receive notice of a Merit Scholarship any day now. The program has been notifying approximately 7,500 finalists of scholarship awards since March, and should wrap up this month.

Williamson, who scored in the 93rd percentile on the SAT and took Algebra III and calculus in high school, is considering a wildlife-related program as a major at MSU after being inspired BY his uncle, Shaun Williamson, a wildlife biologist.

Lydia McKennon, who taught Williamson all his advanced math courses, said all the seniors were tired of calculus by the end, but the Merit Finalist could think his away around the mundane.

“He would approach a problem in a different way, and it’s always nice to have a student who can do that, who can show you a different method for arriving at the answer,” she said. “He has a great way of thinking. I knew he had the potential to be a Merit Finalist.”

“History students have an advantage if they understand the world around them, if they’re up on current events, if they know more about the subject than just what’s in the book,” he said. “Taite has a very great awareness of world situations, and all that applies when you’re studying the past.”

Davis wasn’t surprised Williamson was considering a career in wildlife — though he stopped serving as a Cougar mascot to focus on academics after his freshman year, Williamson is a hunter and fisherman outside the classroom.

“We’re in an era where a lot of species could be in tremendous danger in his lifetime. I, for one, would like to know a guy like Taite is out there working on those problems,” Davis said.

Williamson said hard work in academics is worth the payoff, but he also cautioned other students traveling down rigorous paths of study to find a balance.

“Don’t study too hard or you’ll hurt yourself more than anything, really,” he said. “That can apply to anything in life.” 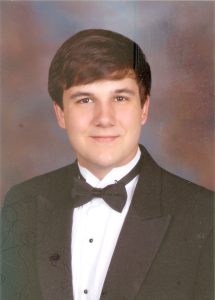