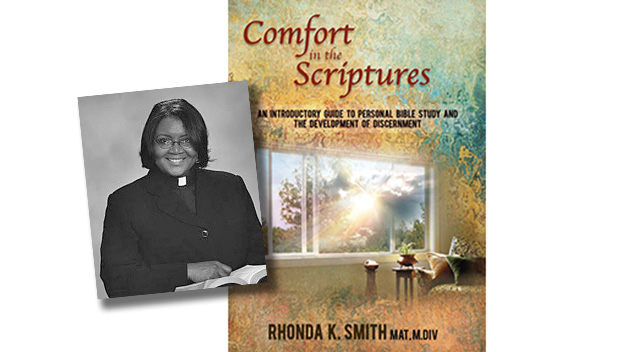 VICKSBURG — A Vicksburg native who is now an ordained minister, has published a book to help people learn to find solace from Bible scripture.

The Rev. Rhonda K. Smith’s book, “Comfort in the Scriptures,” is aimed at helping people develop a personal relationship with the Bible to help them in every day life.

Smith, an evangelist and founder of Word of Truth Ministries, who now lives in Atlanta, Georgia, said the inspiration for the book came from her interaction with people as she traveled across the country.

“I realized there are a lot of people who are uncomfortable with the Bible and with the scriptures, and with church in general,” she said. “Everything about this book is intended to bring people back to the comfort that the scriptures were originally intended to provide.”

The title, she said, is based on Romans 15:4, “All things written before time were written for our learning; that we through patience and comfort in the scriptures might have hope.”

“In today’s time, with everything going on in the world, no matter who you are, in this day and time, there are people who need comfort,” Smith said.

“I personally have experienced all kinds of trial and tribulations, and I have always found comfort in the scriptures, and so I wanted to find the comfort that I find in the scriptures with those who have not been able to find that comfort.”

Smith said one of the reasons people feel uncomfortable with the Bible “Is when you look at a Bible, it’s a big book with thin pages and tiny little words, and when you open it up and begin to read it, the language that they use and the words and the names are unfamiliar to us at this time.”

Also, she said, some people look at the size of the Bible itself, and are threatened and intimidated by trying to read a book that large. For other people, she said, the Bible and scripture have been used as an offensive weapon.

“There are people who will use the scriptures to condemn everybody to hell, and if everything is legalized, and everything that you know about the Bible is negative and makes you feel bad about yourself, why would you ever want to read the Bible?

“They never get to the comfort and the love, the benefits of knowing the word, and some people don’t think (the Bible) is valid in any regard, particularly young people; they think it’s a fiction book, and they think King James wrote the Bible. There’s a lot of misinformation about what the Bible is and its actually origins.”

Discussing her decision to enter the ministry, Smith said she worked at The Post in the early 1990s as a reporter and later in the public relations field.

“I ran from my call for many, many years,” she said.

It was in 2005, after she moved to Atlanta, that she stopped running.

“I found what I thought was my dream job, and I was suddenly unhappy. I had everything I thought I wanted from the time I was a little girl, and then all of a sudden I was unhappy.”

It was while she was praying and trying to find the reason for the way she felt, “The Lord spoke to me in an almost audible voice. He said, ‘Everything that you’ve asked for I have given to you. The one thing I have asked of you, you have not given to me.

“He reminded me of the scripture in Revelations that said, ‘People are overcome by the blood of the lamb and the power of the testimony,’ and he said, ‘I’ve shed my blood, where is my testimony.’

“That is the point where I finally had to accept the call I had been running from.”

“We do street ministry, and every city we go we don’t just sing, we share with people in the community. I was thinking that was enough, but God was calling me to another place, and I understand everything I’ve been through was preparing me for the ministry I’m really just beginning to enter into.

“No matter who you are and what you’ve been through, I can sort of relate to that, and people know when you’re real.”

She works with several different churches in the Atlanta area, she said, “But the program that is the most special with me is the evangelism program at Beulah Missionary Baptist Church, because that’s my heart.”

And being a published author?

“I am so excited, but most importantly, I have a peace, because I know that at this point in my life, I have done one of those things God has told me to do. He actual put the book on my heart some years ago, in 2007, when I first started to think about the book.”

She put is aside when she entered the seminary, but when she graduated, she said, “It became a bigger burden. I put it off in 2017, but then God spoke to me and in 2018, and said, ‘This is the year.’ Here we are in June, and it’s been my primary focus this year.”

Vicksburg installs cameras as tool in fight against crime

VICKSBURG — Criminals beware. The city of Vicksburg has its eyes on you. The city’s Information Technology Department, with help... read more