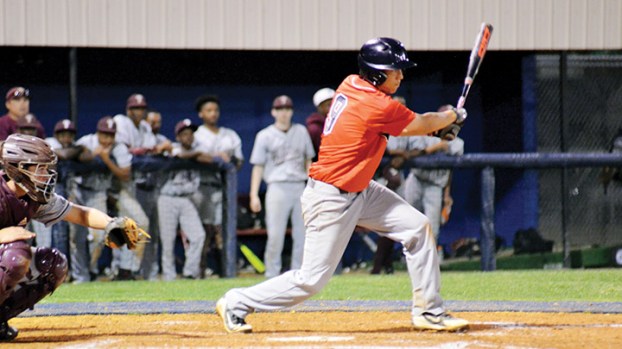 Brookhaven’s Trace Owens only gave up one earned run in the playoffs in two starts. Owens had a RBI single in the game three win over North Pike.

Brookhaven head baseball coach Matt White knew Tyler Mixon would be the first arm out of the bullpen in the Panthers’ game three against North Pike.

The senior, as he’d done all year, delivered in a big spot and sent the Panthers racing into the second round of the MHSAA 5A playoffs against West Jones.

Brookhaven dropped the first game of the best-of-three series at home to North Pike in blowout fashion, but a phenomenal performance in game two by senior left-handed pitcher Trace Owens allowed the Panthers to host a winner-take-all game three.

The game didn’t start as the Panthers intended, as North Pike jumped up 6-1 in the second inning behind a plethora of walks from Brookhaven pitching, but Mixon put a halt to it as he threw six innings of relief. He didn’t surrender an earned run until the last inning when the contest was already out of reach.

The Panthers erased the early deficit in the second inning behind base knocks from Corbin Falvey, Gatson Walker and Logan Emfinger in the third inning, which gave the Panthers a 7-6 lead, and once Mixon was pitching with the lead he put the nail in the coffin for the remainder of the contest.

The Panthers would pile on runs in the bottom of the sixth inning to take a commanding 12-6 lead behind four consecutive singles from Owens, Falvey, Walker and Emfinger, and Mixon would finish the contest on the mound for the Panthers in the seventh inning.

The win sent Brookhaven into the second round against West Jones High School, but the Mustangs eliminated the Panthers in two tightly-contested games.

“I usually can’t go that long in games because my arm starts hurting a little bit,” Mixon said. “I was feeling good tonight though, and that really helped me. It could have been my last time playing here, and I just wanted to help my team out and keep going. That’s the best that I’ve pitched all year. I’m just glad that I was able to come through for my team.”

“He’s a bulldog on the mound,” Brookhaven head baseball coach Matt White said of Mixon. “He doesn’t usually go long, but he’s dominant for us. He wanted the baseball tonight, and he was dominant again. He’s a competitor and the ultimate bulldog for us. Our defense feeds off of Mixon. He’s a strike-thrower, and he’s a fast worker. It’s really easy to play behind that”

Brookhaven High School’s Daniel Panzica and Will Moak won the boys doubles state championship in early May. How it happened... read more