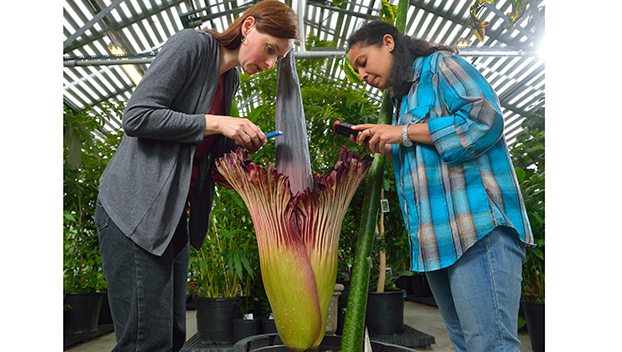 OXFORD  – Interested onlookers are keeping a safe distance, by watching online one of the world’s largest and smelliest flowers unfold in the atrium of the Ole Miss School of Pharmacy’s Faser Hall.

When it does, the 5-foot-tall flowering plant will appear otherworldly, with its now-lime-green outer bloom unfolding to display a dark burgundy interior. The species will also emit an odor similar to decomposing flesh when it blooms, a smell intended to attract pollinators but a putrid smell nonetheless that has earned titan arum the nickname “corpse flower” or “corpse plant.”

Lal Jayaratna, a research and development botanist with the Maynard W. Quimby Medicinal Plant Garden of the National Center for Natural Products Research, where the plant is usually housed, said he believes the plant will blossom Thursday or Friday.

On Thursday morning, a steady stream of brave onlookers viewed the titan arum in person in the UM School of Pharmacy, some even posing for pictures. A live stream of the titan arum is also available at the Ole Miss Pharmacy YouTube page.

The plant, native solely to western Sumatra and western Java in Indonesia, is grown at the garden as a collection and also for research by NCNPR scientists on the chemistry of different parts of the plant. The garden is home to three mature titan arums and a few others.

The blooming of the plant is a rare sight, with the plant taking about five or more years to start flowering. It then subsequently blooms infrequently, once in three or four years, and even more rarely in cultivation. In 2014, Ole Miss housed two plants that bloomed within weeks of each other.

NEW ORLEANS — A 75-year-old priest has surrendured to authorities following an investigation into allegations of sexual misconduct with a... read more