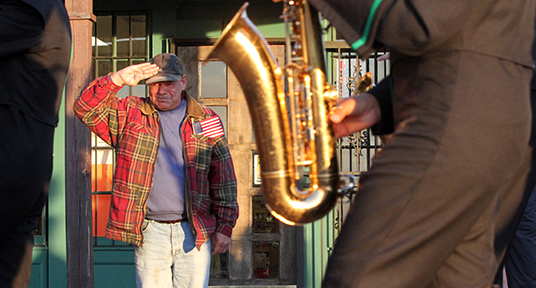 Eddie was well known throughout the Vicksburg community, especially in the downtown area. He was often homeless, and due to this, Eddie’s age, which was somewhere in his 60s, and military service could not be immediately verified. Eddie’s cause of death is not yet known.

“Eddie was a really good guy. He was a guy that would do anything in the world for you, was very intelligent, but battled alcoholism his entire life,” Sherriff Martin Pace, who met Eddie in the late 1970s, said.

“Eddie deserves a respectable funeral,” Pace said. “A lot of people, I think, took him wrong. There are people that could not look beyond the illness of alcoholism to see the real person, but the real person was a kind, smart guy that would do anything in the word for anybody, and I considered him a friend.”

Pace said that Eddie worked various jobs around Vicksburg on-and-off throughout his life, but was often completely homeless.

“Eddie never seemed to let his plight in life get him down,” Pace said. “He could always see the good in people, even when he was suffering from horrible periods with his alcoholism. He could still have a smile and have something positive to say even when he himself was totally homeless, and periods of time when he was living in vacant buildings and boxcars, he would still have that spirit about him that everything was going to be ok.”

“He was like a friend and a father to me,” Hall said. I’ve known him since 1992, when we sat beside each other at Thanksgiving dinner at the mission. He was a drinker, he was an honorable man, everyone knows him, and it just breaks my heart.”

“I remember when I was little boy talking to Eddie and looking for wisdom, and he loved the Lord, and always quoted scripture,” Hall said.

Hall also lauded Eddie’s generosity, as Eddie would regularly donate $50 from his to the River City Rescue Mission every month to buy the men staying there coffee.

“He always donated to the men that were staying here, and he would come and stay days with us. He loved all of them,” Hall said.

Eddie was known for being well versed on a variety of topics and current events, and would strike up conversation with those who worked downtown often.

“I work for Peterson’s and I’ve worked there for 11, 12 years, and Eddie was just a fixture downtown,” Mary Benson said. “He would stop in the stores, and we’d give him water, or something to eat, or visit with him. It’s just hard to believe that there’s no more Eddie.”

Pace could recall plenty of funny stories with Eddie, but one memory stuck out to him. During a cold winter, Pace went by the vacant building Eddie was living in to make sure he had stayed warm, and Eddie insisted Pace come inside to see something.

“I walked up this plank with him to the second floor, and I was like ‘Eddie, what are you doing, what do you want me to see?’ and all he wanted me to see was how beautiful the sunset was out the window of this vacant building, looking out over the river.

“We all get so tied up in our own lives and get so busy and overlook things like that, and here is a homeless, alcoholic guy living in a vacant building who could probably have a better vision than most of us driving up and down the street.”

Graveside services for Eddie will be 1:30 p.m. Friday at Cedar Hill Cemetery. Visitation and reception will follow at River City Rescue Mission.

James Buie spent a lifetime working for the man. Now, he’s ready to be his own boss. “I always dreamed... read more