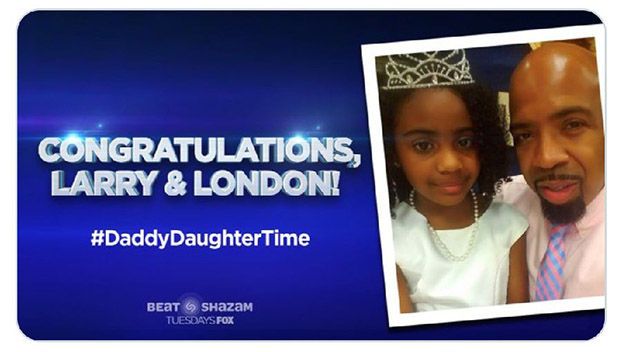 “I thought it was a scam,” Hooper said. “I have never won anything … not even a raffle.”

The contest is a promotion for the Fox Television game show “Beat Shazam” hosted by Jamie Foxx, and the prize is an expense-paid trip to Los Angeles to meet Foxx.

Hooper, the principal of Natchez-Adams School District’s Freshman Academy said he works year around and welcomes the opportunity to take some time off work.

Two weeks before the Sunday’s announcement, Hooper said his daughter told him she wanted to go to California.

“Out of nowhere, my daughter asked if I had ever been to California,” Hooper said. “Then she said she wanted to go, and I just let it go in one ear and out of the other.”

The contest win comes as a welcomed surprise to Hooper who began the year with a near-death experience.

“I lost a few days at the first of the year,” Hooper said. “I went to bed January first and woke up a few days later in Jackson not knowing what was going on or where I was.”

Hooper had suffered several seizures severe enough to break three bones in his back.

“My daughter found me,” Hooper said. “Since I have been home from the hospital she has been taking care of me and making sure I take my medicine and resting well.”

London, 8, is active, participating in ballet, gymnastics and track. She was also selected as the homecoming queen at McLaurin last school year and she also was a principal’s scholar.

Hooper’s wife, Sharonda, entered the two in the contest.

“If there was ever a unique daddy-daughter relationship it is Larry and London,” Sharonda said. “She and her father share so much in common, and she is really his right hand.”

Sharonda saw the contest on Foxx’s Instagram page and submitted a video prior to a vacation to Panama Beach.

The only rules for the video were to “post a video via Twitter or Instagram showing how you and your daughter or how you and your father or father figure spend your ‘daddy daughter time’ together,” the rules said.

“I got another message from them stating they needed another submission of them,” Sharonda said. “I was not there, so my son Kaydan, who is 12, actually shot the video and sent it to me, so I could submit it. I just knew they were going to win this contest.”

Hooper said his daughter is excited about the opportunity to go to Los Angeles and meet Foxx while taking in some of the sights while they are in the area.

“I don’t know all of the details at this time, but I have been told there will be a filmed meet and greet,” Hooper said. “The trip will be taken care of by the ‘Beat Shazam’ television game show. I think we will be in LA a few days, so that will be nice.”

Since the announcement has been made public, Hooper said, family, friends and co-workers have congratulated him through social media.

“A lot of people have asked me to speak to Jamie for them,” Hooper said. “They have also asked for autographs.”

At this time, the exact date of the trip has not been set, but Hooper expects it will be sometime in the next few weeks.

VICKSBURG — The sky may have been colored in gray, but the mood on Washington Street was anything but dreary... read more