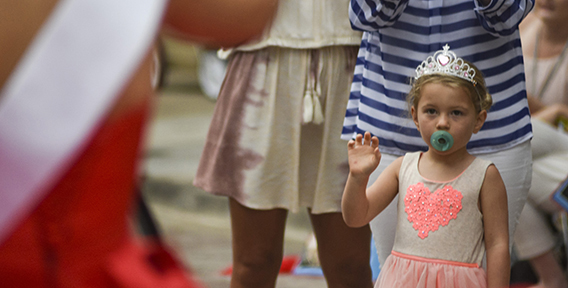 VICKSBURG — The sky may have been colored in gray, but the mood on Washington Street was anything but dreary as the Miss Mississippi parade moved through downtown to cheers, applause and waves of the spectators packing the sidewalks.

Early on it seemed the parade wouldn’t take place. Heavy rains from a line of thunderstorms moved over the city. By 6 p.m., one hour before the parade’s scheduled start, there were few people setting up to watch the parade, many of them taking advantage of the overhangs, balconies and store awnings that were available.

Friends Deborah Sprayberry and Susan Wiggins were two of the people taking advantage of a balcony. Both had granddaughters who are princesses in the pageant.

“I was here last year,” said Sprayberry of Raymond, whose granddaughter Hayden Cannada is a princess for Colby Brumfield, Miss Desoto County.

This year was the first year for Wiggins’ granddaughter, who is a princess for Annelise Meador Miss Pride of the South.

Also seeking cover in the entrance of a downtown building was Addison Richardson of Houston, who held a lighted poster with the words, “Show Them How It’s Done, Molly,” in support of her friend Molly May MissAmory. The parade was her second; May was Miss Delta State last year.

“The poster has pictures of Molly when she was 11,” she said. “We have fans showing how she looks now.”

Just north of Richardson, the cheering section for Dana Wesley Miss Pontotoc Ridge sat waiting for the parade to start.

“We’re all from West Point,” said her mother, Corbin Wesley. “This is our third year.”

Standing on Washington Street across from Crawford Street, mothers Lisa Ivy, Paulette McClanahan and Margaret Hyer wore badges with pictures of their daughters, who were all pageant contestants. Ivy and McClanahan wore pictures of each other’s daughters.

Ivy and McClanahan said they are learning the ropes.

“One is have a good label machine,” Ivy said.

Another pageant veteran was B.B. Ezell from Pelahatchie, whose granddaughter is a princess for the third year.

“I drove here in a rainstorm; I want some sights to see,” she said. “I have a farm; It’ll be late when I get back to feed those critters.”

Here is a gallery of photos from the Vicksburg Post from Monday night’s parade.