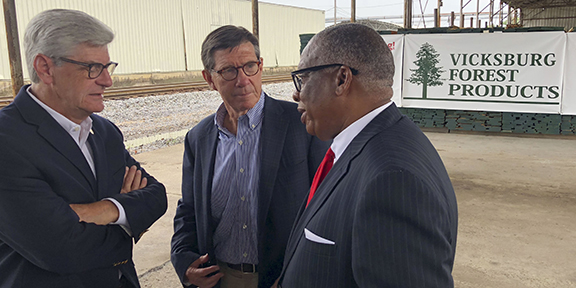 Anderson-Tully originally announced in March that a third party company would be purchasing the mill and that all 158 current employees would be laid off prior to the sale. Vicksburg Forest Products purchased the mill May 15, and Tuesday announced that they plan to reopen in late July and hire 125 employees to work once they reach full capacity.

Representatives from Vicksburg Forest Products were joined by Mississippi Gov. Phil Bryant, who made his second visit to Vicksburg in a little over a month to make an economic development announcement. He previously announced May 2 that 50 jobs would be created by North Carolina-based lumber company Industrial Wood Products, which will be opening a plant on Magnolia Road.

“They (the 125 people hired) will be able to work hard here, earn a good living and live the American dream and perhaps send their children if they want to one of our fine community colleges for workforce training or one of our great universities. They will have that chance and opportunity because this mill is reopened and great Mississippians own it and great Mississippians are going to work at it, “ Bryant said. “I hope to see you again in less than a month or maybe sooner when we are making another announcement for Warren County and the city of Vicksburg, right here in the best place for economic development I think in the state of Mississippi.”

Anderson-Tully had operated as a hardwood mill in Vicksburg since 1889 and been owned by The Forestland Group since 2006. When Vicksburg Forest Products purchased the mill in May, they announced that they would be transitioning to being mostly a southern yellow pine sawmill. The plant has been closed since May to allow for upgrades and equipment changes because of the change in wood. Once the upgrades are completed, Vicksburg Forest Products manager William Van Devender said they will be able to switch between pine and hardwoods as the market demands.

“We had to put about $5 million worth of new equipment in to handle southern pine,” Van Devender said. “What we are doing is we are making it flexible enough that we are going to start out in pine, but if the hardwood business were to pick up, we have the flexibility that we can start buying hardwood logs. There are only three other mills in the south that I know about that can cut pine and hardwood and we are going to be one of them. If that market picks up, then we can cut both.”

Van Devender said they plan to begin purchasing wood next month and they are currently on schedule to finish the upgrades July 26 and begin cutting wood in August. At full capacity, he said they will be able to produce up to 100 million board feet per year operating one shift at the mill.

“We are going to be a full dimensional mill,” Van Devender said. “We are going to cut decking, all kinds of dimensions of lumber. That is what our goal is. We won’t be at 100 million board feet this year, but hopefully by next year we will be.”

The parent company of Vicksburg Forest Products also owns Southeastern Timber Products, which owns and operates a mill in Ackerman. Their purchase of Anderson-Tully only included the Vicksburg-based sawmill and not the roughly 300,000 acres of timberland owned by Anderson-Tully throughout the southeast.

OXFORD  – Interested onlookers are keeping a safe distance, by watching online one of the world’s largest and smelliest flowers... read more