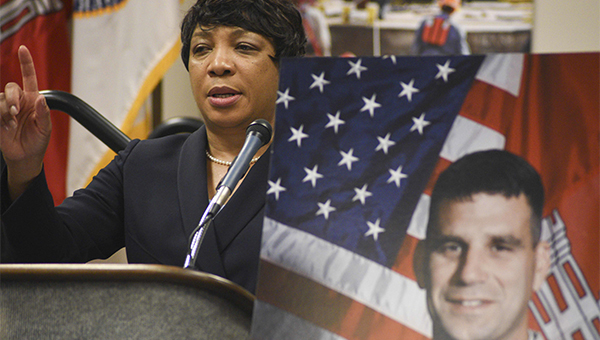 VICKSBURG — The civilians and military gathering at the Vicksburg District Headquarters on East Clay Street Tuesday came to say a final goodbye to a comrade, friend, husband, son, father and brother.

Greg Raimondo served as deputy commander of the U.S. Army Corps of Engineers Vicksburg District and later as its chief of public affairs. He died June 7, leaving for many a void they said cannot be replaced.

There were awards to his family: a surveyor’s benchmark, the Commander’s Award for Civilian Service, a resolution from the Board of Mayor and Aldermen declaring Tuesday “Greg Raimondo Day” in Vicksburg and a key to the city for his family.

But the greatest tribute to Raimondo came from friends and co-workers, who gave their thoughts during a memorial service Tuesday morning.

“Truly, Greg has left a mark here; he is the benchmark. He is our point of reference,” said Pat Hemphill, District deputy for programs and project management.

Raimondo divided his time between his job in Vicksburg and his family in St. Louis, Missouri. And while he initially had some misgivings about Vicksburg, Hemphill said, “He came to love Vicksburg and was a better ambassador for the city than I was.”

District Commander Col. Michael Derosier said the Army saying that “everyone is replaceable,” didn’t apply to Raimondo. “Greg was the rare exception; he is irreplaceable,” he wrote in remarks read by Lt. Col. Aaron Wolf, the District’s deputy commander.

“He leaves a hole in our formation that will be very, very difficult to shore up. He did so many things.

“He was the type of person who would strike up a conversation with anyone he encountered, and always had a tendency to put a smile on your face.”

Raimiondo’s daughter Katie discussed how he made the most of his time with his family when he was in St. Louis, either grilling outdoors, going out to eat or going on family excursions. Katie, who attends the University of Mississippi, recalled how she and her father cheered for the Rebels during football season.

“My father was my hero,” she said.

“Greg’s smiling down on us, and gregarious as he is, he would be working this crowd; he would love this,” said Doug Kamien with the Army Navy Club.

Kamien, a retired District employee, said Raimondo was always focused on his job and worked to make the District better. He said Raimondo was willing to help with repairs at the Army Navy Club, adding, “He really made a contribution every day; he was a true patriot. He was everywhere.

“Right now, he’s standing in front of Jesus and saying, ‘How can I be of service.’”

VICKSBURG — Since the age of seven, Anne Elizabeth Buys has been part of the Miss Mississippi Pageant organization, so... read more