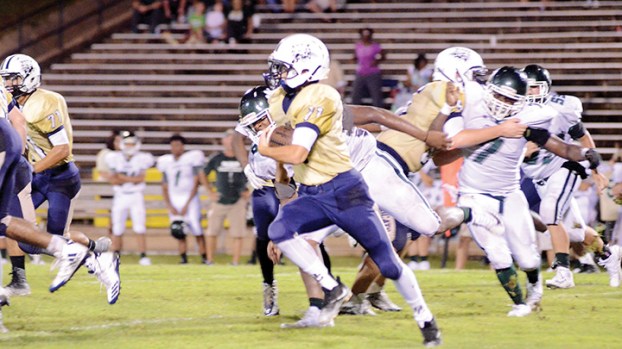 Bobcats: Experience will be the key

A year after returning to the playoffs for the first time since 2013, Bogue Chitto head football coach Gareth Sartin likes what he has coming back to his team in 2018.

On offense, the Bobcats lost starting quarterback Trey Nettles to graduation, but sophomore quarterback and likely successor Shaw King saw a lot of action in 2017.

For the season, King completed 46 passes for 368 yards and five touchdowns. King averaged throwing for 69 yards per game.

“Shaw has a big arm, and I think that he’s got a chance to be really good for us,” Sartin said. “He got some experience last season with Tyler, and I think that’ll be good. I expect us to be able to throw the football well this season with him and what we have back at the wide receiver position.”

Bogue Chitto does return multiple receivers who had big years in 2017.

Sophomore Zach Upkins led the Bobcats in receptions last year with 27. He had 364 yards and five touchdowns.

“Zach is a guy that has a lot of potential,” Sartin said. “He’s going to be the guy that can go up and make plays for us in the red zone. He’s got so much potential and we expect him to be a big player for us this year.”

On the other side of the formation, the Bobcats have Brandon Lewis who had 285 yards and two touchdowns.

The Bobcats will turn to DeMarcus Godbolt in the backfield to carry the rushing load throughout the season.

Godbolt has played everything for the Bobcats according to Sartin, and he’ll welcome the challenge of playing running back.

“He’s a guy that we can depend on to carry the ball for us,” Sartin said. “He’s played fullback for us, so he’s used to carrying the ball. “

Sartin said both Owen Anderson and Reid Smith would see time in the backfield as well.

The Bobcats have a lot of experience returning on the offensive line as well, something which excites Sartin as the 2017 season approaches.

“It all starts on the lines,” he said. “We have a lot of guys back from an offense that was pretty good on the line last year, so that will help us going into this year.”

Sartin said the key to winning more games was the confidence that the team gained throughout the year.

“Once we started to win some games, we started to play better,” Sartin said. “We beat McLaurin in that first game and that helped.”

The Bobcats knocked off Enterprise in the last game of the regular season, which gave them the No. 4 seed from the district, an impressive feat for Bogue Chitto.