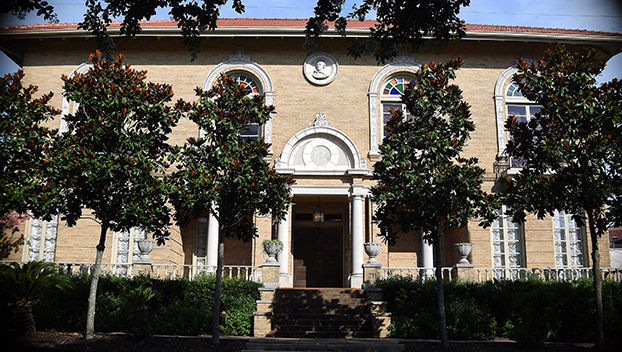 Fred and Melinda Kent from Shreveport, Louisiana, recently purchased the former Prentiss Club building on Pearl Street. The couple plans to turn the space into a museum that will host traveling art exhibits. (Nicole Hester/ The Natchez Democrat)

“We want to do something that brings tourists to Natchez and brings the community together to enjoy art exhibits,” Melinda Kent said.

“They think Natchez is great and are investing in Natchez,” Green said.

Melinda said the couple hopes to have the museum up and running within a few months.

“We are going to hit the ground running,” Melinda said, “clean it up and get ready for hosting events and visiting different museums to get pieces from them to exhibit.”

Realtor.com shows the property had been listed on the site for 633 days with a listing price of $459,500 for the 12,000 square foot Renaissance-style building.

The realtor.com listing also said the two-story building over a basement has three bedrooms, three full and two half baths, and “is zoned favorably for numerous uses.”

“It was built as the clubhouse of the Prentiss Club, a private men’s organization chartered in 1903, which was named in honor of Sergeant Prentiss, a Natchez attorney and nationally acclaimed orator,” MDAH records state. “The building served as Masonic Temple from 1928 into 1970s, for Harmony Lodge No. 1 and Andrew Jackson Lodge No. 2, F&AM. Included in Natchez Walking Guide (#38).”

The property was added to the National Register of Historic Places in 1979. For many years, part of the property operated as a bar called the Pearl Street Cellar. Eventually the bar closed until the late Natchez designer and developer Buzz Harper acquired the building and made extensive renovations.

From the Vicksburg Post VICKSBURG — Miss Mississippi pageant veterans were the winners Wednesday night during the first round of... read more