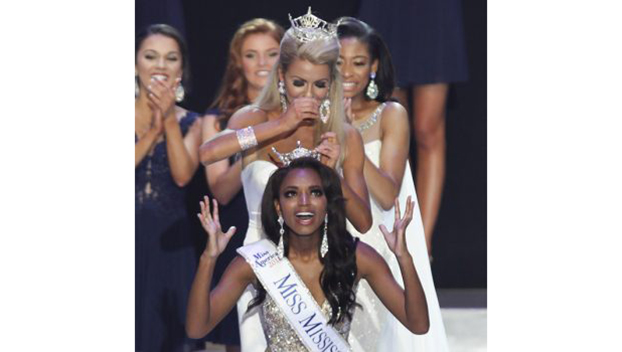 VICKSBURG — And the winner is Miss Tupelo Asya Branch.

Wiping tears from her eyes, Branch was heard saying, “This does not feel real,” shortly after being crowned 2018 Miss Mississippi Saturday night at the Vicksburg Convention Center.

This year’s was the 61st Miss Mississippi pageant in Vicksburg.

“It is just a whirlwind honestly. There is so much. I am still trying to fathom the fact that I was crowned Miss Mississippi. Like this is not my local Tupelo crown anymore, this is the Miss Mississippi 2018’s crown on my head. It is me. It is real. It is unbelievable,” Branch said.

Branch is a third-time competitor in the Miss Mississippi Pageant and was a swimsuit preliminary winner in Wednesday night’s competition.

For the talent phase of the competition, she sang, “One Moment in Time.”

With all the excitement, Branch said she would probably not even sleep tonight.

“I will be wide-awake and pumped. I will sign my contract and I will take on the job as Miss Mississippi and prepare my absolute hardest for Miss America,” she said.

Branch is a student at the University of Mississippi where she is studying broadcast journalism and her platform is Empowering Children of Incarcerated Parents.

Branch’s father is serving time in prison, but she still had plenty of family support during the week.

“My mom was able to come for all four days of competition and it has been an honor having her out there supporting me,” she said.

Also, Branch’s aunt and cousin came from Michigan for the competition.

“I can’t thank them enough,” she said.

Along with the Miss Mississippi title and crown, Branch receives a $10,000 scholarship.

At the beginning of Saturday’s competition, the top 10 plus a People’s Choice contestant were named and re-competed in talent, swimwear and eveningwear.

The six semifinalists each earned $2,000 scholarships provided by the Miss Mississippi Corp.

Think you know everything about Brookhaven, Lincoln County? Find out using the online edition of the Mississippi Encyclopedia

OXFORD, Miss. – Discover the wonders of Mississippi at your fingertips with the online version of the Mississippi Encyclopedia. The... read more