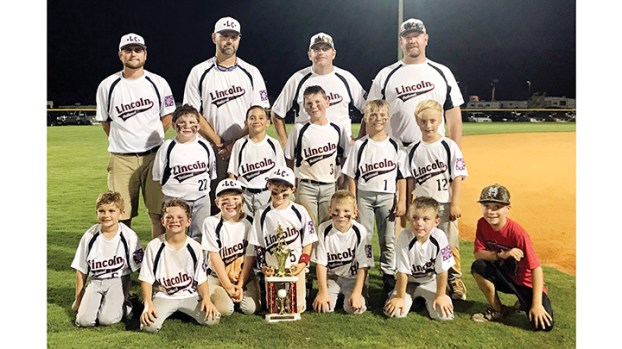 The Lincoln National 7U All-Stars started off their district tournament with three consecutive wins to advance to the district championship round.

The Nationals won their first game over Pike County in the first game of the tournament, and then won two more games to move into the district title game Monday night.

The Nationals had to go through Pike County again, needing one win to claim the district championships.

After winning game one against Pike in extra innings to start the tournament, the Lincoln Nationals fell in the first game  of the championship round to Pike County 12-3, but because they hadn’t lost yet they were allowed to play another winner-take-all game against Pike County.

Pike County won a highly-contested contest by a score of 16-13 to claim the district title. Both teams advance to the state tournament, which will take place the weekend of July 6 in Mendenhall.

“I’m just proud of all the kids and coaches on this team,” coach Patrick Holcomb said. “They battled the whole game and we just came up short. Pike has a really good team with a solid defense and good bats. We have a full week before the state tournament. We will practice hard and compete with anyone there.”

The 8U Lincoln County Americans took two out of three games Saturday at the Lincoln Civic Center Baseball Complex as... read more