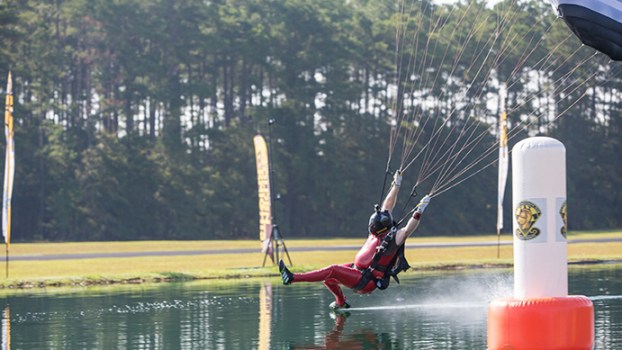 Flying against the world — Skydiver flies to Poland for contest

A Brookhaven native who has spent his life falling out of the sky is headed to Europe next week to face the best the world has to offer in the sport of skydiving.

Professional canopy piloting coach and military skydiving instructor Greg Windmiller is headed to Wroclaw, Poland, to compete in the 2018 World Canopy Piloting Championships, July 3-7, as a member of the U.S. national team. It will be the 10th consecutive year he’s traveled the world to face off against the best canopy pilots on the planet.

“There’s no jitters. But it’s still fun, still exciting and still challenging,” said Windmiller, a 1990 graduate of Brookhaven High School. “Younger generations are coming up every day, and they’re getting better and better. It’s still challenging to do well and try to beat them.”

Windmiller earned a spot in the world title matches by placing third in the U.S. national competition last year. He will be joined by seven other Americans representing the nation against up to 100 other canopy pilots from around the world.

In Poland, the divers will compete in the advanced aspects of their sport — canopy piloting is far beyond simply leaving an aircraft and pulling a ripcord. It stresses control and technique, skills that will be tested in a series of 12 jumps from 6,000 feet over four separate courses during the championships.

“There’s a lot of strategy,” Windmiller said. “We take things into consideration like the field elevation of the drop zone, barometric pressure, dew point, wind velocity, temperature. We’ll make individual determinations about which parachutes we want to use in those conditions — I’m taking four parachutes with me.”

The canopy pilots will compete on a speed course in which they activate a laser timer on their way into a 240-foot course that bends 75 degrees in the middle. The timer stops when the pilots exit the course, and fastest times over all three jumps will be the speed champion.

The pilots will also compete on a distance course to see who can go the farthest before touchdown and an accuracy course that requires them to drag the surface of the water and collect points before landing in a scored zone. This year, the pilots will perform tricks and maneuvers in a freestyle course for the first time.

Windmiller said the U.S. team sets the standard internationally, but there are many skilled canopy pilots from around the world who are growing in skill each year. Several of the world’s best compete in American competitions annually as a way to study, test themselves and improve in the sport, he said.

But Windmiller is not backing down, even as a 46-year-old competing in a sport where injuries are common.

“There’s a running joke that nobody runs to the podium without limping a little bit,” he said. “But pride makes the limping a little easier. What I’m going for is an overall win. In this field of competitors, with this many people, we tell the younger jumpers the goal is to get at least one medal in one event. But the overall goal is to win everything.”

Windmiller has made around 15,500 jumps in his lifetime, starting with his service in the U.S. Army, through his membership in the U.S. Army Parachute Team — the Golden Knights — and into his life as a private coach and defense contractor. He teaches advanced canopy-piloting techniques only to experienced skydivers and military jumpers, often members of the special forces community.

He has access to the soldiers, as he lives just outside Fayetteville, North Carolina, at the edge of Fort Bragg, home of the Army’s XVIII Airborne Corps and headquarters of the United States Army Special Operations Command.

“I travel all over the world to teach,” Windmiller said.

Windmiller has been skydiving since 1991 — his first of 26 years in the Army — and competing as a professional skydiver since 2000. He is the son of Rob and Donna Windmiller of Brookhaven.

Fruit trees grow everywhere, and there is a soft breeze blowing through their leaves. Children run barefoot in the villages,... read more