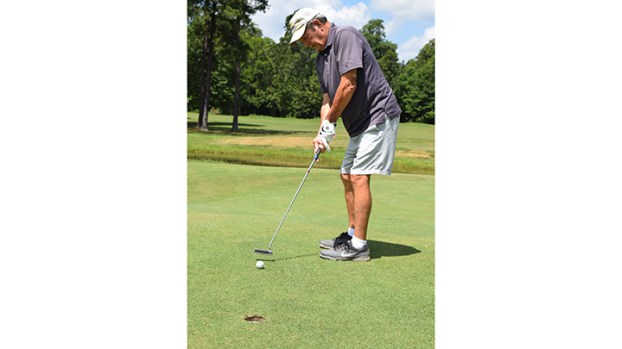 With temperatures bearing down on 100 degrees, the air is so thick and warm at noon on Wednesday the sky is boiling white, not blue.

The asphalt on the road softens in the heat, releasing the smell of tar. The concrete sidewalk cooks underfoot. The warmth charges up the crickets. They blow off excess body energy by chirping, from the shade of the pines with the steadiness of a machine gun.

But at the swimming pool at the Brookhaven Country Club, the water is clean and cool, and blue as royalty. The lifeguard is in the water, up to her waist, laughing and splashing with a handful of children in the shallow end over whom the heat holds no power.

“The biggest initiative we have is to make this a place for families,” said Pat Lowery, one of the club’s co-owners. “We want people to know they’re welcome here, and we want them to come try us out. We’re throwing the doors open and inviting people to come see all the things we have to offer.”

The Brookhaven Country Club has new owners, new management and a new strategy to rebrand as an open-to-anyone activity center for all of Brookhaven, with the full experience available in a variety of membership packages ranging from $40 to $200 per month, or on sale by the day for non-members looking to kill a few hours. It’s a semi-private club — anyone can rent a golf cart for $15, hit up the pro shop and stroke away all day from now until the Fourth of July.

The biggest change happens Sunday, when a pair of laws that shift the definition of “qualified resort area” go into effect and bestow that sought-after status on the club. The new law will allow the club to serve alcohol on Sundays and extend its last call from the city-mandated 11 p.m. to 2 in the morning.

“It gives us flexibility,” Lowery said. “If someone wants to have a reunion here, or a wedding reception, those kinds of events normally go way past 11 p.m. Having resort status will make us more competitive in being able to host those events.”

When Brookhaven voted to go “wet” back in 2013, city aldermen passed a liquor ordinance that handicapped Mississippi’s already-tame booze laws — beer sales still stop at midnight like everywhere else, but liquor stores in the Home Seekers Paradise close at 8 p.m. and liquor sales stop at 11 p.m.

Lowery and his ownership team — which also includes Advanced Technology Group owner Neal Boyte, Brookhaven Honda owner Mark Covington, Insurance and Risk Managers Vice President Mike Smith and McLane Company Regional Sales Director Steve Yawn — tried, for a long time, to go on an end-run around those restrictions by getting resort status, but something always went wrong in the Legislature. A simple bill granting the status would become weighed down by pet projects from lawmakers from other areas and the legislation would die on a chairman’s desk. Last year, it died in front of the governor.

But earlier this year, Brookhaven’s two lawmakers — Rep. Becky Currie and Sen. Sally Doty — managed to push through a pair of bills that bend the resort status needle just enough for the country club to qualify. The word “Brookhaven” doesn’t actually appear in either, but the legal language is there and both legislators managed to play defense throughout the session to keep other lawmakers’ projects out of the bills.

The new owners are hoping resort status opens up new opportunities for the country club, which was built in 1935 by a government works initiative. Former WorldCom CEO and federal inmate Bernie Ebbers pumped a couple million dollars into the club when he owned it in the 1990s, and car dealer Jeff Wilson owned the club until selling it to Lowery’s group in early 2017.

Lowery pointed out that, of the other three golf courses near Brookhaven, two are state-owned and pay no taxes — Wolf Hollow at Copiah-Lincoln Community College and Quail Hollow at Percy Quinn State Park — and the third, Fernwood near McComb, already has resort status.

“We start out $25,000 behind because we pay property taxes,” he said. “Resort status was essential to make this facility competitive.”

When resort status kicks in Sunday, they will celebrate. A pool party with live music starts at 4 p.m. and hamburger plates will be sold for $5.

In addition to qualifying for resort status, the new owners have poured nearly $50,000 into rehabbing the eight tennis courts and hired away former managers of Annandale Golf Club in Madison — grounds expert Al Osteen is overseeing improvements to the 18-hole course, and general manager John Lofton is running day-to-day operations.

A bar and grill is up and running as any other restaurant, and anyone can buy lunch there daily. A Sunday buffet opens from 11 a.m. to 2 p.m. Whiskey bottles stand ready in the spacious barroom and dozens of soft lights hang low from gunmetal gray chandeliers in the wood-floored banquet room. The pro shop is open for business and a workout room overlooks the pool.

“What sets us apart from other places is service,” Lofton said. “Just doing the right thing. It takes hours and hours of being out here to make sure everything is running properly, and that’s the kind of attention we’re giving it.”