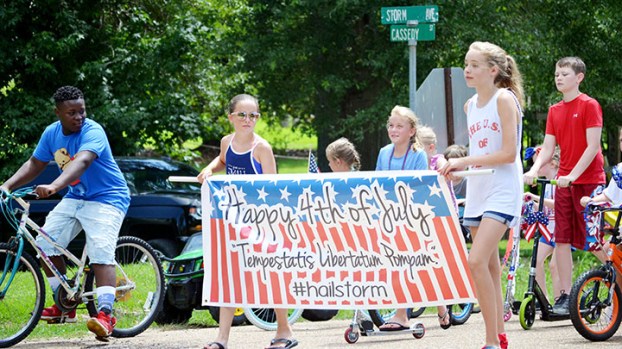 Photo by Donna Campbell Caroline Kilpatrick and Ellie Slay carry the banner at the beginning of the Storm Avenue community parade last year. The Independence Day block party will begin at 4 p.m. Wednesday.

Sometime between inflating a 25-foot waterslide and grilling a few hundred burgers, the neighbors on and around Storm Avenue are planning to gather with their families, friends and friends of friends Wednesday for the annual “Tempestatis Libertatum Pompam.”

The time for the party has been pushed back this year — it begins at 4 p.m. — and organizers hope the later start will allow for cooler weather, said Sam Sones.

The National Weather Service in Jackson is predicting a 40 percent chance of showers and thunderstorms throughout the day and into the evening, which could be good news if it doesn’t rain. It will be cooler than it could be.

Sones thinks the block parties started in the ‘70s. He can remember attending them as a kid, but then he grew up and moved away and they eventually stopped. Now that he’s living on Storm Avenue again, he wants his children to have those same memories. He and his neighbors got together three years ago and decided to get it started again.

“It’s already bigger than I remember,” he said. “It’s such a group effort on our street. It’s a massive group effort. Most every house participates and the ones that don’t are out of town.”

Most of the families on Storm Avenue will host some sort of activity in their yards. Besides the 25-foot water slide, several smaller slides will be set up for children to enjoy. One smaller one will be available for just toddlers and small children.

Some of the yards will feature a snowball stand, a dunking booth and a patriotic photo booth. Some residents will serve homemade ice cream from their porch and another family will give out fresh blueberry parfaits. A passenger train will give rides to children and adults from one end of the avenue to the other.

New this year will be a machine that shoots water for the kids to play in, Sones said.

Those who attend are encouraged to start at the Church Street area of Storm Avenue to set up for the parade. A tent will be set up with plenty of patriotic decorations to dress up bikes, scooters, golf carts and participants, he said.

The parade will begin about 5:30 p.m. and end near the Farm Bureau grill about 6 p.m.

It’s a free block party — hamburgers and hot dogs are provided. Those who attend are asked to bring a side dish or dessert to share and their own beverages.

“It’s designed to be a true Brookhaven summer event,” he said.

Also new this year will be Storm Avenue Block Party T-shirts, which will be available for $10 each. Proceeds from the sale of the shirt will be used to help a Lincoln County man who is battling ALS, Sones said.

Several city and county offices will be closed Wednesday in celebration of Independence Day, however, Waste Pro will run its... read more