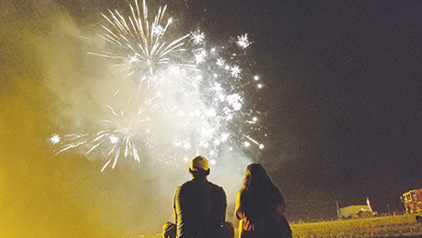 America is celebrating its 242nd birthday Wednesday, but a Lincoln County church is starting the party early.

Heritage Family Church at 1295 Hwy. 51 North in Brookhaven is hosting a patriotic program, “Celebrating Freedom,” on Sunday beginning at 2 p.m. in the church sanctuary and ending with about an hourlong fireworks display over the baseball field behind the church.

While Heritage has shared its fireworks display with the community for several years, this is the first time they’ve planned an entire day of activities.

The worship service starts at 2 p.m. in the sanctuary and includes patriotic-themed music, a message from the church pastor and a recognition for area veterans.  After the service, church members will be serving a barbecue meal outside. Beverages will be provided.

Organizer Joe Farr encourages those who attend to bring their own folding chairs.

“We’re expecting quite a large crowd,” he said.

Besides a barbecue dinner, they’ll also have softball, horseshoes and an inflatable jump house for children.  The fireworks show will begin after dark, Farr said. Sunset in Brookhaven Sunday is 8:11 p.m.

Several other Fourth of July celebrations will actually occur on the holiday.

Residents on and around Storm Avenue are hosting a block party Wednesday beginning at 4 p.m.

The party will begin with a walking parade which includes children and adults on various modes of transportation — including feet — but no cars or trucks.

Many families on Storm Avenue will be hosting activities or snacks in their yards, like water slides, a dunking booth, a patriotic photo booth and homemade ice cream.

Hamburgers and hot dogs from the grill and cold beverages will be provided, but organizers ask that those attending bring a side dish or dessert to share.

The event is planned to end in time for everyone to attend the annual free fireworks show at Lincoln Civic Center.

State Sen. Sally Doty, of Brookhaven, is joining in on the fun with her annual fireworks show at the Lincoln Civic Center.  This is the fourth year for the patriotic show.

A patriotic music program will begin at 9 p.m. on FM 102.1 and the fireworks will start at 9:30 p.m. The music will be synchronized with the fireworks show.

“It makes it special, the way it’s synchronized,” Doty said.

Doty advises viewers to park their vehicles before 9 p.m., as spots will fill up quickly.  The parking lots aren’t lit, so keeping an eye out for children will be important, she said.

The legislator looks forward to the annual Independence Day celebration.

“It’s an honor for me to serve as state senator and it’s a small way to give back to my community and celebrate the Fourth of July,” Doty said.

As Independence Day approaches, firework safety is a topic that often comes to light.

According to the U.S. Consumer Product Safety Commission, there were an estimated 12,900 fireworks-related, emergency department-treated injuries in 2017. Eight fireworks-related deaths were reported in 2017, with victims ranging in age from 4 to 57.

“Fireworks can be extremely dangerous, even if they are legal,” said

Michael Spencer, a pilot who was injured from a fireworks incident. “My advice would be to leave them to the professionals.”

Spencer, a pilot from Bowling Green, Kentucky, knows all too well how dangerous fireworks can be if not used safely. While on vacation in 2015, he was injured by a shell-and-mortar style fireworks device and lost several fingers on both hands, undergoing more than 11 surgeries.  He is now committed to making sure this tragedy does not happen to anyone else.

In order to stay safe during the holiday season, here are some rules to keep in mind.

• Never use or make professional-grade fireworks.  Do not buy or use fireworks that are packaged in brown paper; this is often a sign that the fireworks were made for professional displays and are not for consumer use.

• Never allow young children to play with or ignite fireworks, including sparklers.  Sparklers burn at temperatures of about 2,000 degrees. This is hot enough to melt some metals.  Never place any part of your body directly over a fireworks device when lighting the fuse. Move to a safe distance immediately after lighting fireworks.

• Never point or throw fireworks at another person or occupied area.  Light fireworks one at a time, then move away from them quickly.  Keep a bucket of water or a garden hose handy, in case of fire or other mishap.

• Never try to relight or handle malfunctioning fireworks. Soak them with water and throw them away.  After fireworks complete their burning, douse the spent device with plenty of water from a bucket or hose before discarding the device to prevent a trash fire.

Pet safety is important to take into account this holiday season, as fireworks scare many household pets, said Beth Adcock with the Brookhaven Animal Rescue League.

Pets go missing during the July 4 holiday more than any other time of the year, even  animals that have never run away before.

Some precautions that can be taken include keeping your pet indoors and playing calming music for them, she said. Keep fireworks and sparklers outside and away from pets.  Take a current photo of your pet and ensure that they are wearing a collar with an up-to-date tag on it.

The Mississippi Highway Patrol will begin the 2018 Fourth of July holiday enforcement period on Tuesday at 12:01 a.m. and conclude Wednesday at midnight.

“In an effort to enforce traffic laws and reduce traffic crashes, MHP will participate in Operation Crash Awareness and Reduction Effort during the holiday period,” said Capt. Johnny Poulos, director of the MHP public affairs division.

As part of Operation CARE, all available troopers will be assigned to saturation patrols to combat speeding and distracted driving issues. Safety checkpoints will also be established during the period to remove impaired drivers from the roadways and promote seatbelt usage.

During the Independence Day holiday in 2017, MHP investigated 183 crashes with three fatalities and made 100 DUI arrests on state and federal highway systems.

“We are asking motorists to have designated drivers in place regarding festivities and to join us in making the roadways safer in Mississippi,” Poulos said.

Andrew Different can’t remember the moment he decided to be a band director. It was always his goal. The 27-year-old... read more