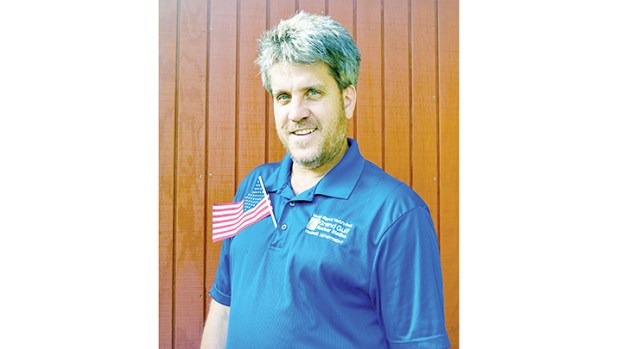 Not only does Zimmerman celebrate his country’s birthday on July 4, but his birthday as well.

“It’s a party, but it isn’t your party,” Zimmerman said.  “It’s still enjoyable though.”

Zimmerman was born on July 4, 1965, to Lloyd Roger Zimmerman and Beverly Ann Britt at Sheppard Air Force in Wichita Falls, Texas.  Zimmerman’s father worked as an electronic warfare officer at the time of his birth.

Zimmerman grew up and lived in Brookhaven but has lived in different parts of the country due to enlistment in the Air Force and work.  He has been married to Jessica Spring for four years, and they have two children — Paige, 17; and Camryn, 9.

He works as a procedure writer for Grand Gulf Nuclear Generating Station, where he has been employed for 12 years.  Before returning to Grand Gulf, he worked as a contractor for General Physics Corporation for eight years.

Zimmerman is a 1983 graduate of Loyd Star Attendance Center.  He has a bachelor’s degree in nuclear engineering and technology from Excelsior College.

In 1986, he joined the Air Force and began working in computer maintenance technology.  At the time, he was stationed at Kirtland Air Force Base in Albuquerque, New Mexico, maintaining the network for the supercomputing center.

“It feels wonderful, and I enjoy having this day as my birthday, because it makes me even prouder that I served my country.”  Zimmerman said.