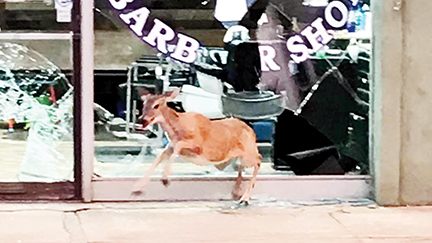 Most of Jill Case’s customers are sweet as can be, but only once has she been visited by a real deer.

Unfortunately, she wasn’t open at the time.

Three deer crashed into the front door and storefront window at Brookhaven Barber Shop about 8:30 p.m. Saturday, ran around inside a bit then dashed back out the way they came — through the glass.

Justin and Jill Case own the barbershop, which recently moved from its spot on South Whitworth Avenue to the old Art Studio Building on East Cherokee Street. Jill Case said they’d been on Whitworth 21 years, but have only been in the new spot since April. She had history in the old location, but now she’ll have a great story to tell.

She was out Saturday night with her 6-year-old grandson, Paxton Rushing, looking for painted rocks in the downtown area. Painting, hiding and finding rocks has become a popular hobby in Brookhaven in recent months. Cook said several people were out that night.

They’re was a group of people walking on the sidewalk near Smith Jewelry when Rushing made a discovery at the First Bank ATM.

“He found a rock right there at the little ATM,” Cook said. “He went to grab it and we turned to come across the street and just as we did, those deer came right out of that alley way and they never slowed up. Right on into that building they went.”

The deer shot out past the Cherokee Alley mural Don Jacobs painted last year and into the street. They sailed past the startled rock hunters and straight into Case’s shop.

“One went in the door and the other two went in the bottom of the window,” Cook said. “They got in there and were sliding around and trying to get back out. They were trying to get out the same way they went in. And that’s when the whole window fell in.”

Cook said she saw some people near Fred’s looking for rocks and may have scared the deer into running into the alley to seek an escape.

“Maybe they were trying to run from them and just happened upon us,” she said. “Miss Jill’s light was on and they might have seen their reflection.”

Cook had her cell phone out and was taking pictures of her grandson getting the rock at the ATM. She swung around when she saw the deer and when they came out she starting shooting pictures and video.

“I was taking that picture of him and just made a circle and started snapping pictures of them,” she said.

When they shot out of the barber shop, one went back into the alley and the other two took off across the tracks.

Rushing is heard screaming on the video as they ran away. Cook said they were all a bit shocked at the experience.

Case heard about the commotion almost immediately. A friend sent her a photo of the deer escaping the shop.

She spent Monday cleaning up bloody glass and debris, but plans to be open today for anyone who needs a haircut and a good story.

Most people celebrate their birthday with cake and presents, but William Zimmerman celebrates his birthday with barbecue and fireworks.  Not... read more