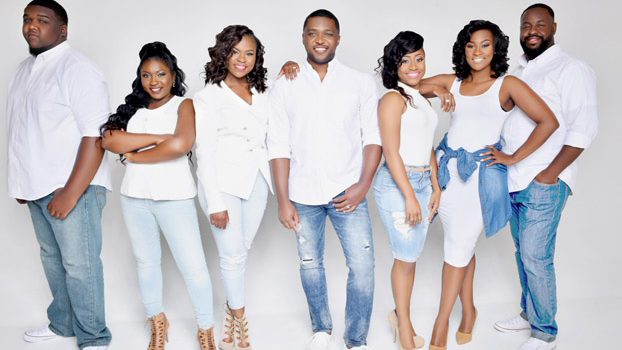 NATCHEZ — Brandon Mitchell and Singers With a Purpose recently released their second album titled “Amazing,” and it quickly reached No. 4 on the iTunes Gospel Chart and No. 8 on the Billboard Gospel Chart.

Having no record label, the group works diligently to write, record and promote their music, Brandon Mitchell said.

“This album was the first time we really felt like we knew what we were doing in terms of putting it together,” Brandon said. “There were times when we were really struggling trying to get this done.”

Brandon and his wife, Trinity, wrote most of the songs on the album. The lyrics, Trinity said, are inspired by their journey in life.

“Our music is really like our testimony,” Trinity said. “When we wrote ‘My Needs,’ we were so broke, but He brought us through it.”

Many of the members of the group, including Brandon and Trinity, majored in music in college.

“I did not see myself doing this in my life,” Brandon said. “I knew I was going to be an athlete, because I ran varsity track in school.”

Brandon’s plans changed, however, after he was injured in a car accident.

“A drunk driver hit me,” Brandon said. “I had multiple injuries and during that time, I felt God was telling me something else.”

Brandon currently serves as the director of music at College Hill Missionary Baptist Church in Jackson and is a partner at CLF studios in Jackson.

Trinity said she always knew music would be her path.

“I am a music teacher in Jackson at Johnson Elementary School,” Trinity said. “I am also the director of music at Shady Grove Missionary Baptist Church.”

Trinity said she believes the group has a great future in store and looks forward to the day when the group can sing full-time.

Brandon’s sister, Brittany, said she was “talked into” joining the group, but is now really excited about the progress they’ve made.

“When we were doing our sound-check for the album release concert, we checked to see what our album was doing,” Brittany said. “We watched with excitement that night and the day of our concert to see the album climb the charts. It was so exciting.”

The group has performed with some well-known gospel artists, including Tamela Mann and Kirk Franklin.

Being independent artists has not hindered the group from reaching out to get assistance from others, Brandon said. As they worked on the album, they paired up with producer Ay’Ron Lewis of Nashville.

“We recorded half of the album in Jackson and the other half in Nashville,” Brandon said. “He (Lewis) did an amazing job of turning our ideas into reality and developing it all musically.”

The group has a busy month ahead of them as they are set to perform July 20 in Moss Point and July 26 in Hattiesburg for the 8th District AME Congress at the Thad Cochran Center on the USM campus, and they will then perform July 29 at the Mississippi Gospel Music Awards.

While they are logging many miles for performances and promotion, Brandon said, they are relying a great deal on social media to reach their fan base. The group also is halfway done writing music for its next album.

“We don’t even have a name for it yet,” Trinity said. “We are looking to have more collaboration with the writing process on this album.”

Brandon said the group is getting used to the idea people know their music and know who they are.

“I was playing music during the altar call the other day,” Brandon said. “I was not even singing the lyrics, but the church members were singing it. That was amazing to me.”

Brandon said the group hopes to bring an event to the city of Natchez in the near future.

The album “Amazing” is available in hard copy from the group’s website, brandonmitchellswap.com or on many digital media outlets.

Man decides to spend his final days on the Mighty Mississippi

From The Vicksburg Post VICKSBURG — If you were told you had three months to live, what would you do?... read more