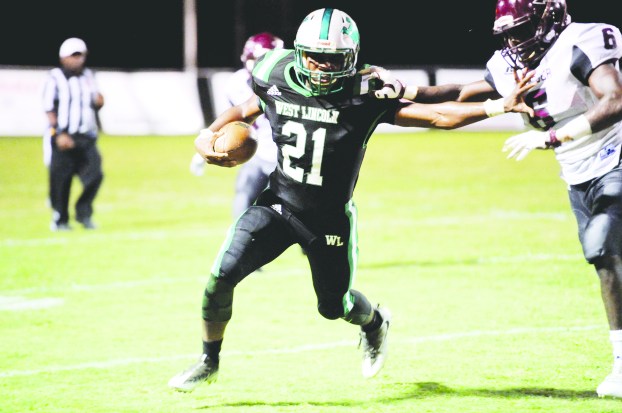 Daily Leader file photo/Michael Brothern rushed for 747 yards and four touchdowns on 100 carries for West Lincoln as a sophomore.

Every school in the area returns one of their main running back threats for the 2018 season after strong years in 2017.

Damarrell Leggett was a work horse for the Panthers last season, finishing the year with 1,525 yards and 21 touchdowns on 187 carries during his senior season, but Jaquarius Edwards had a strong season for the Panthers as well.

On the year, the sophomore finished the season with 1,158 yards and 14 touchdowns over the course of 133 carries.

With an inexperienced offensive line, Panther head coach Tucker Peavey said he’ll need his skill position players, including the running back position, to play well at the beginning of the year.

“We need our skill guys to step up and play well immediately,” Peavey said. “That will give us time to let our offensive line get into rhythm.”

The Cobras will miss the rushing element of former quarterback Dale Thigpen this season, as he rushed for over 1,000 yards for Wesson.

The Cobras have an answer there, however, as Jaquavion Harris had a strong season in 2017, rushing for 905 yards and 10 touchdowns over the duration of the season.

The Cougars will be tasked with replacing the rushing production that senior quarterback Kendarius Feazell left. Feazell rushed for 396 yards last season, averaging 5.5 yards per carry.

Kylan Cooper had a strong sophomore season for Lawrence County in 2017, as he rushed for 356 yards and four touchdowns on 66 carries for the Cougars.

The Cougars will have to replace a lot of production out of the backfield with Tanner Waldrop and Logan Murray leaving the program after graduation. Waldrop rushed for 1,050 yards, while Murray rushed for 578 yarsd on the season.

Freshman Luke Johnston had 27 carries for the Panthers last season, but there’s not a load of experience returning in the backfield.

“We’ll be able to get some different guys looks in the backfield throughout the year,” Brookhaven Academy head football coach Ron Rushing said. “We have some guys that got experience in some reserve roles that we’ll be counting on to step up this year.”

The 2A schools in Lincoln County all also return formidable options to man the running back positions in 2018.

After losing Patrick Price to graduation, the Hornets are going to be tasked with replacing a running back who rushed for 948 yards and 12 touchdowns on 125 carries last season.

Lucky for them, they had two underclassmen have stellar seasons in 2017.

Loyd Star head football coach Brian Ford said they’ll get the football to a wide variety of players throughout the season.

The Yellow Jackets have some experience returning in the backfield, and they’ll rely heavily on junior Tailor Young in the 2018 season.

Young through the first six games last season rushed for 400 yards and four touchdowns on 77 carries.

“We’re going to rely on him at running back,” Enterprise head football coach Brooks Burns said of Young. “He ran hard for us last year all through the season.”

The Bobcats will rely heavily on do-it-all Damarcus Godbolt from a rushing perspective in 2018.

Godbolt rushed for 188 yards and four touchdowns last season on 37 carries, but Bobcat head coach Gareth Sartin said Godbolt will be who they rely on from a rushing perspective in 2018.

“He’s done it all for us on the offensive end,” Sartin said. “He’s played fullback and carried the ball for us. We have a lot of confidence with him in the backfield, and we know he’ll get the job done.”

The Bears lost Chase Owen after the 2017 season due to graduation. Owen rushed for 668 yards and 11 touchdowns on 102 carries.

The good news is they have Michael Brothern back to man the backfield, and he dominated for the Bears in 2017 rushing for 747 yards and four touchdowns on 100 carries as a sophomore.

“He’s an extremely tough runner and he’s been that way,” West Lincoln head coach B.J. Smithhart said. “He got a lot of carries for us last season, and we’re going to get him the football a lot this year.” 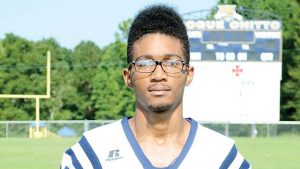 Daily Leader file photo/Damarcus Godbolt rushed for 188 yards and four touchdowns last year, and will be relied a lot this fall, according to coach Garreth Sartin.

The most current reports on fishing conditions of lakes in the area are courtesy of the Mississippi Department of Wildlife,... read more