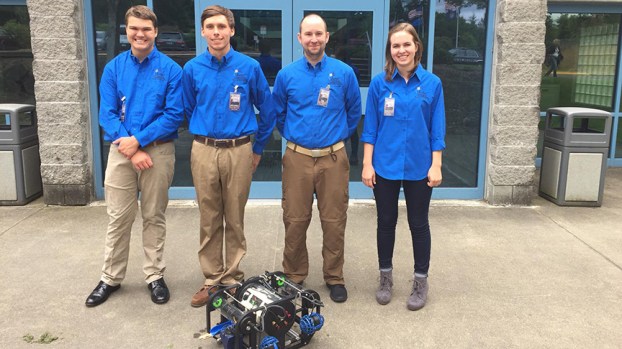 Co-Lin’s robotics team went for the gold at an international competition on the West Coast in late June.

The Seawolf Underwater Robotics Engineering team of Copiah-Lincoln Community College traveled to Federal Way, Washington, to compete in the Marine Advanced Technology Education underwater robotics competition. The team placed 16th out of 28 teams in their category, with 68 teams in the competition overall.

“It was an amazing experience that I was honored to be a part of,” said Seawolf Austin Kuriger. “We overcame many obstacles as a team during the competition. In the end, I was proud of myself and my fellow teammates for what we accomplished.”

Each member of the team had a specific responsibility, including programming, building, designing and piloting the robot itself. A technical report is written, and a sales presentation is put together and presented. The team also gives an engineering presentation to a panel of industry engineers.

For each part of the process of building the robot, there are points that can be earned depending on how well the part is completed. The robot performs eight to 10 missions underwater, such as moving debris away from an engine block or transporting a mooring out into the water. The missions garner points for completion. The technical report, sales presentation and engineering presentation are graded as well. After everything has been completed, an overall score is given to represent the amount of points earned.

This was the team’s seventh year to compete in the Marine Advanced Technology Education robotics competition. Their technical report, written by Lowe, placed sixth overall in their category.

“I was very proud of these students, they worked really hard,” McKone said.

The MATE Center started in 1997, and its purpose is to use marine technology to inspire students to think critically and creatively apply science, technology, engineering and mathematics to real world situations.