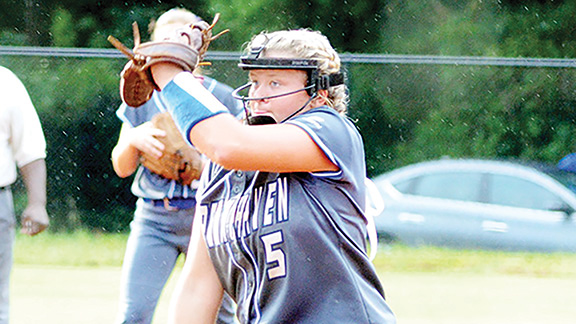 Daily Leader file photo Madi Smith will return for the Cougars this season in the circle after a stellar 2017 season.

With practice starting this week and only four returners from last year’s team coming back there is plenty of competition for the slotted openings for the Lady Cougars.

“I told them at our pre-practice that nobody’s spot is locked in,” Flowers said. “Everyone is going to have to come in and earn their spot. It’s about putting the best nine on the field, and that’s what we’re going to do. It’s going to be a lot of competition for those nine spots.”

The Lady Cougars have a lot of experience returning in the circle for the 2018 season, as they’ll have sophomore Madi Smith and freshman Emily Claire Felder back.

“Madi has pitched for us for a long time,” Flowers said. “She’s going to throw in the upper 50s and she has really good off-speed pitches. She’s been with us since she was in sixth grade, and she’s thrown a lot for us.”

“Emily Claire threw for us a lot last year when we had to play four games in a row in south state,” Flowers said. “She’s going to throw in the upper 50s as well. She’s a real power pitcher.”

The Lady Cougars lost some production at the plate after the 2017 season, including lead-off hitter and Southwest Community College signee Kailyn Jordan, but Flowers said she sees plenty of players who can step up and help fill those roles.

“We have a bunch of players that have been with me since they were young that are now ninth and 10th graders,” Flowers said. “We expect them to play like juniors and seniors, because they’ve been with us for a while.”

The Lady Cougars will start their season July 27 as they play host to Bowling Green Academy at 5 p.m.

Every school in the area returns one of their main running back threats for the 2018 season after strong years... read more