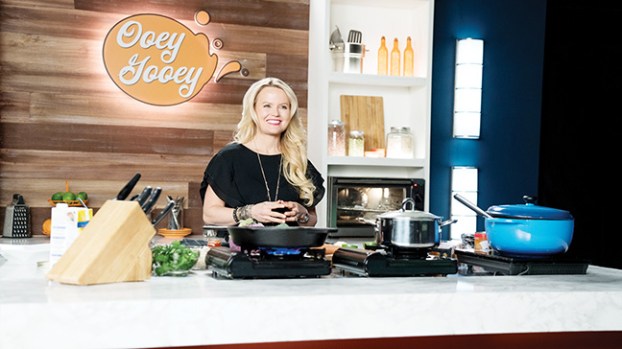 Photo courtesy of Food Network Brookhaven native Katie Dixon is still in the competition as this season of “Food Network Star” heads toward a close.

Not only is a Brookhaven dynamo taking the Food Network kitchen by storm, she’s hanging onto the lead for Fan Favorite as well.

Katie Dixon, the daughter of Vickie and Henry Newman, of Brookhaven, is among the top five finalists who are hoping to follow in the footsteps of “Food Network Star” alums Guy Fieri and Aarti Sequeira.

She wants to be the next Food Network star and host her own show and she is just four episodes away from her chance.

For the title, the restauranteur must out-chef and out-talk her competition — Amy Pottinger of Hawaii, Christian Petroni of New York, Manny Washington of Florida and Palak Patel of New York.

Dixon is a wife and mother of two girls — Risi and Stevee Kate. On each episode, she strives to show her Mississippi roots, while remaining true to herself and her family. She’s been able to see her weaknesses through the course of the show and work to improve herself each week.

“I try to do too much sometimes,” she said. “I’ve always wanted to take the risk, take the dare. I try to do a little too much. Even when I’m speaking I just have so much to say. And it’s that way when I’m cooking.”

She said the judges — Bobby Flay and Giada De Laurentiis  — like her Southern hospitality and her authenticity. She has Mississippi roots and it shows.

“Giada said, ‘Katie, what you have you can’t teach. You’re so genuine and I love how it comes across on camera,’’’ Dixon said. “I think that’s the best thing that I do, that I’m myself. Through the good, the bad, the hard work, the tears, the joys in life, if you’re just yourself, you always come out ahead.”

Cooking is Dixon’s way of showing love to people, whether it’s her family and friends, customers at the Birdhouse Café in Hattiesburg or people she meets in her travels.

She wants to share that passion with viewers and to teach them not only how to put healthy spins on their favorite foods, but also to take chances, like she did by auditioning for the show.

“It’s so hard for people to step out and show their passion,” she said. “They’re scared of being rejected or fear of failure. For me, every step that I go in this competition, I just want to come back and teach others — especially my children — that the biggest joys in life, there’s going to be hurdles to get there, but jump over them and don’t be afraid.”

She said it’s tough for her girls to see others being critical of their mother on the show, but she uses it as a teaching moment.

Dixon is in the lead on the Food Network voting for Fan Favorite. Voting is allowed once a day through Aug. 10 at www.foodnetwork.com/shows/food-network-star/sweepstakes/vote.

“We need the Southern girl to win the Fan Favorite,” Dixon said. “I’ve had such a good response by people reaching out to me on social media, giving words of encouragement. I love being able to be a little bit of inspiration to people.”

Organizers of the proposed One Lake project in Jackson are promising an extended public comment period and town hall meetings... read more