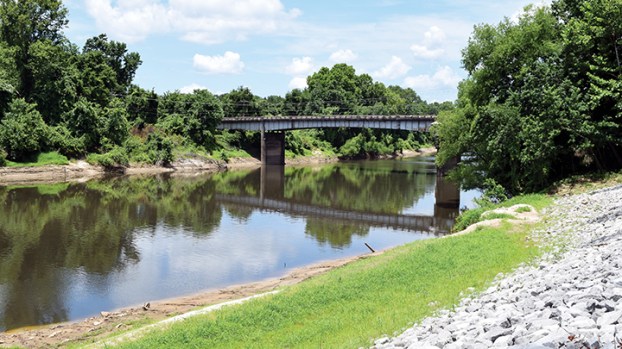 Photo by Adam Northam Several people in communities along the Pearl River are concerned about the impact of the One Lake project.

Organizers of the proposed One Lake project in Jackson are promising an extended public comment period and town hall meetings for downstream communities worried about the project’s impact on the Pearl River.

Rankin-Hinds Pearl River Flood and Drainage Control District attorney Keith Turner said a public meeting somewhere on the middle portion of the river south of the capital would take place before mid-August, and the period for public comments on the proposal will be extended beyond the legal 45-day window that would have ended the first weekend of August. Local governments downstream from the project site — particularly in Monticello and Columbia — have passed resolutions opposing the project, which aims to create a 1,500-acre lake down the Rankin-Hinds border.

“There will be ample opportunity for everyone to be heard,” Turner said. “We have received some comments requesting an extended comment period, but based on everything going on with the project we knew we would be extending it anyway. We hope to announce a new public schedule early next week.”

So far, the only confirmed public meeting on the One Lake project is scheduled for 6 p.m. Tuesday, July 24, at the Mississippi Agriculture and Forestry Museum on Lakeland Drive in Jackson.

Government and business leaders downstream have criticized the levee board for ignoring their concerns and giving short shrift to One Lake’s potential impacts on the middle and lower sections of the river, but Pearl River Vision Foundation spokesman Dallas Quinn said organizers would present new data at the upcoming town hall meetings that will show changes to the river will be minimal.

“Our engineers modeled the river all the way down, so we’ll talk to those folks and see exactly what their concerns are,” he said.

Most elected leaders downstream are worried about One Lake hogging up all the river’s water and causing low flows that could lead to further erosion or hurt industries, like the Georgia-Pacific paper mill in Lawrence County, the area’s leading employer.

Environmental groups like New Orleans-based Gulf Restoration Network are fighting against One Lake to protect wetlands and wildlife habitats. The Pearl River supplies water to some of the most delicate ecosystems in the nation and is home to two species found nowhere else on the planet — the Gulf sturgeon and the ringed sawback turtle.

The Gulf Restoration Network is petitioning the U.S. Army Corps of Engineers to take over the public comment period and force an expansion of One Lake’s 1,400-page integrated draft feasibility and environmental impact statement — a critical piece for moving the project forward released late last month — saying it lacked a biological assessment and is incomplete.

“Despite the sponsor’s statements to the contrary, the lake alternative presents clear problems for water quality, wetlands and wildlife habitat, coastal fisheries and downriver towns and industries with discharge permits,” said Andrew Whitehurst, the network’s water policy director. “The drainage district hired its own contractors and used four and one-half years to write the exact study they wanted to justify damming the Pearl for economic development.”

Turner said One Lake conducted a biological assessment, submitted the findings to the U.S. Fish and Wildlife Service and included the information in the feasibility report’s summary. The full biological assessment will be made public during the extended comment period, he said.

“It’s disappointing the Gulf Restoration Network would take such a stand,” Turner said. “There is a lot of information in (the feasibility report) about wildlife species, and the biological assessment is the foundation of that report. It won’t give much more information, but it will be published.”

“A biological assessment is the cornerstone of any environmental impact statement,” said Cyn Sarthou, the network’s executive director. “The fact that it is missing should be alarming. This is not normal.”

Elected leaders and economic planners downstream criticize the feasibility study as being too light on details for the middle sections of the river, which they say has already suffered from low flows and erosion they believe is caused by the Ross Barnett Reservoir. They’re afraid another lake project will intensify the problems.

“It does not give any effects whatsoever downstream, doesn’t talk about our rise or fall, doesn’t talk about an Easter Flood event like in 1979 and what that would do downstream,” said Lawrence County Community Development Foundation President Dave Nichols. “Without that knowledge, it keeps people in the dark. How can we make an informed decision? Why do they not want us to make an informed decision?”

“Until they do a complete study of the potential effects south of Hinds County, their study is not a true, all-encompassing study,” she said.

Lawrence County Board of Supervisors President Steve Garrett said he doesn’t believe One Lake will create problems for Lawrence County during flood times, but he’s concerned the project will harm the area during low-water months. He said the opening and closing of the Ross Barnett Reservoir has led to widespread erosion problems downstream.

“Since (the reservoir) was built, we believe it’s caused massive erosion problems, with the river dropping out extremely fast and taking the banks with it,” Garrett said. “I’ve looked at this thing and I see absolutely zero upside for us — no benefit whatsoever that could possibly come downstream to Lawrence County from this project.”

The One Lake feasibility study is sparse on the middle section of the river — the words “Monticello” and “Columbia” appear on only five of the report’s 1,400 pages.

But Turner says those few mentions come with river depth data that should dispel downstream notions about the Ross Barnett Reservoir harming water quantity and prove One Lake will have no ill effects, either. The report lists river gauge data showing downstream flows have increased since the reservoir was built in 1963.

“Our project does not exacerbate anything,” Turner said. “We don’t have gates. It’s a weir — water comes in, water comes out. It’s not like the reservoir.”

Blessings come in a school backpack

A group of volunteers in Brookhaven meet once a week during the school year to spread blessings throughout the county.... read more