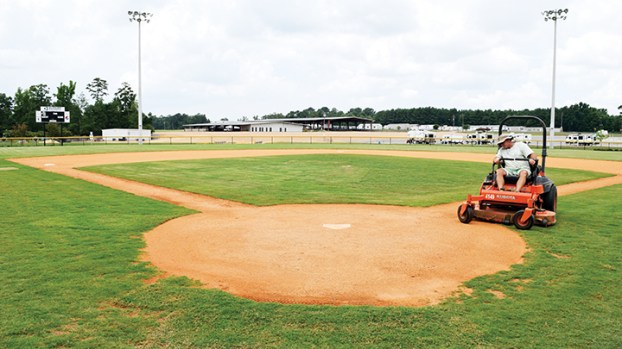 Photo by Adam Northam Chris Yawn uses a zero-turn mower to cut the diamond Wednesday in preparation for this weekend’s Dixie Youth state tournament. About 800 people are expected in Brookhaven over the weekend to see the games.

Hampton Inn and the Holiday Inn Express have only king-size beds available.

The Inn on Whitworth has just one room open for Friday, and Saturday it’s full up. A woman who answered the phone at Comfort Inn said that hotel has “limited availability” this weekend, and America’s Best Value Inn said they’re running short on rooms and expecting lots of visitors in town through Monday for the 12U Ozone and Majors Dixie Youth State Tournament, which begins Friday evening at the Lincoln Civic Center Baseball Complex.

“We’re filling up the restaurants, too,” said Lincoln Civic Center Manager Quinn Jordan. “Most of the teams are traveling in, some farther than others, and that generates heads to beds. When we can get people to stay here and shop in stores, eat in our restaurants, experience our downtown area, they’ll come back to Brookhaven in the future.”

Twenty youth baseball teams are competing in the tournament, with five from nearby and the rest from all corners of the state. Jordan said each team is composed of 12 members and each player is accompanied by moms, dads and siblings for an average of 3.5 persons per baller.

The math works out to more than 800 people in town this weekend — the city’s population will grow by 6 percent while they’re here — to see the tournament, and all those guests come and go and leave their money behind. A look at previous years’ tax diversion records for the City of Brookhaven shows the bump.

Last July, when the baseball complex hosted its first state tournament, that number climbed to $484,926, an increase of $8,831 over the previous year. The jump represents sales taxes at 7 percent — with an additional 2 percent tourism tax on hotel rooms — meaning an additional $125,000 was spent in Brookhaven this time last year.

There’s no way to know for certain that spending was all because of baseball visitors, but Brookhaven’s other big summer event that draws in out-of-towners — Girls Night Out — is in June.

“We will host 11 USSSA tournaments this year and the state tournament — 12 weekends a year, we’re selling out most of the hotels and filling up the restaurants,” Jordan said. “The baseball complex is doing exactly what we forecasted it do. It’s making a huge local economic impact.”

Jordan said the baseball complex during last year’s state tournament took in more than $18,000 in admissions and another $8,500 at the concession stand.

“That’s not counting the hotel room, gas, food, stopping at Walmart. You know everyone has to go to Walmart,” said Tommy Rheams, Dixie Youth’s state director. “But to me, the bigger impact is that a lot of people — you’d be amazed — end up in a community because of something like this. They’ll come in for a baseball tournament, find a job there and move. It will help your community grow.”

A Dixie Youth World Series would be even more beneficial to Brookhaven. Dixie Youth Commissioner Wes Skelton said the organization’s championships make an average $3 million impact on the local economies of host cities.

This year’s series begins on Aug. 3 in Lumberton, North Carolina. Host cities bid for the job and are selected years in advance.

Jordan said he’s invited Skelton to visit the civic center ballfields on his drive through from Texas to North Carolina.

“We’re asking him for a critical review so we can begin preparing our facility,” he said.

Madalyn Oglesby wants a career as a nurse anesthetist, but for now she wants to wear a sparkly crown and... read more