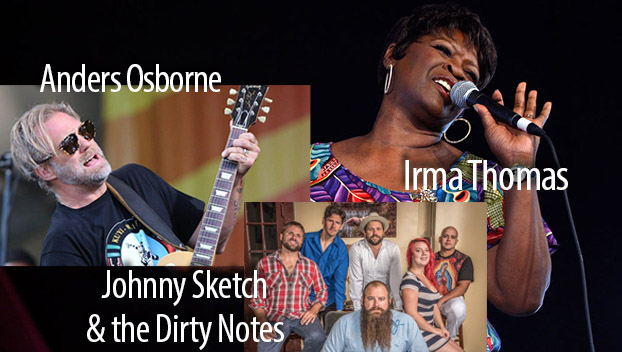 NATCHEZ — New Orleans is already in party mode celebrating its 300th birthday and The Great Mississippi River Balloon Race will join in this October.

Festival organizers unveiled the band lineup for the third weekend in October and the music will celebrate the great music of the Crescent City.

The Soul Queen of New Orleans Irma Thomas and the soulful sound of Anders Osborne will headline the vening’s entertainment on Saturday, Oct. 20.

Both musicians are no strangers to the Great Mississippi River Balloon Race stage, Price said.

“Crowds always come out for Irma. She is incredible,” Price said.

Osborne will be joined by a special appearance from blues musicians Johnny Sansone and Walter “Wolfman” Washington. Washington will be back on the satge Sunday afternoon for the festival’s final act.

New Orleans rock band Johnny Sketch and the Dirty Notes will return to the GMRBR stage to perform Friday, Oct. 19 after the always popular balloon glow.

Local blues musician Brint Anderson will bring back his Bluff City Revue as part of the Sunday afternoon lineup. He will be joined by Wolfman Washington and Natchez Southern rock band Learned’s Hill.

“Brint Anderson is always a favorite,” Price said. “We are excited about all of this year’s lineup. Each band will bring a little bit of Big Easy to Natchez to celebrate 300 years of New Orleans. It will be a good time.”

From Mississippi Today JACKSON — State revenue collections, which have been sluggish for the past two years resulting in significant... read more