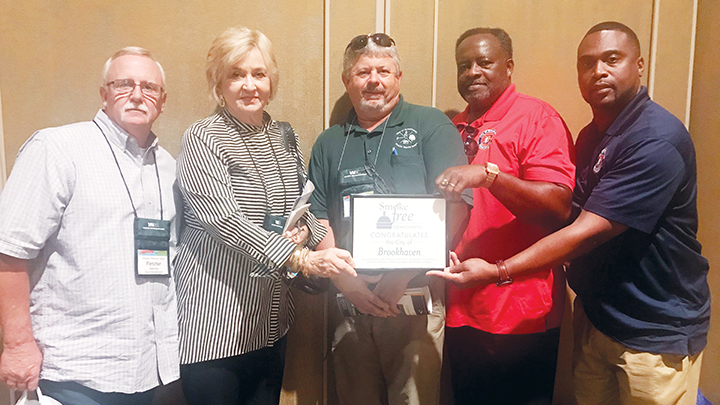 Photo submitted/Brookhaven has been recognized for adding public vaping use to its original no smoking ordinance. Receiving the award are, from left, Fletcher Grice, Karen Sullivan, Keith Lewis, Dorsey Cameron and Shannon Moore.

The state department of health presented Brookhaven aldermen with an award for their smoke-free ordinance at a recent conference on the coast.

The City of Brookhaven was one of several cities to receive the Smoke Free Mississippi award, which is presented to cities that protect the quality of life of their communities by adapting their smoke free ordinance to include E-cigarettes.

“It was an honor to receive it,” Alderman Dorsey Cameron said. “That’s what it’s all about, having a healthier city.”

Brookhaven’s smoke-free ordinance was passed on Nov. 17, 2011.  The amendment to include electronic cigarettes was added on Aug. 4, 2015.

In Chapter 32, Article IV, sections 32-79 of the city’s municipal codes, smoking is prohibited in public places.  This includes cigarettes, e-cigarettes, e-cigars, e-pipes, e-hookahs, or vape pens, or under any other product with similar name or description.  The only exceptions are private businesses or restaurants that opt out of the smoke-free ordinance, and places of business that predominantly sell tobacco and/or tobacco related products.

With Brookhaven added to the list of smoke free communities, the percent of the state’s population protected increased by 20.55 percent.