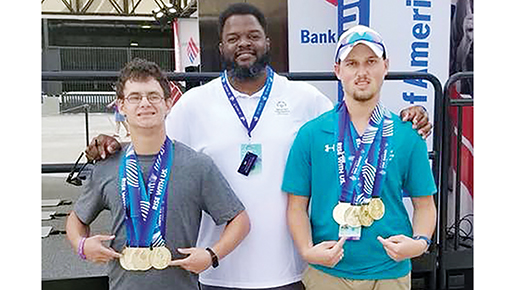 Photo submitted/Garrett Lofton won four gold medals over the course of this week at the Special Olympics in Seattle, Washington. Lofton displays his medals with his coach Richard Clayton and fellow Mississippi lifter Jesse Wimms.

He went. He lifted. He won the gold.

On Wednesday night, Lincoln County’s Garrett Lofton will celebrate his powerlifting championship at the 2018 Special Olympics USA Games with his hometown supporters at a reception at the Brookhaven Moose Lodge, which has supported him and other special olympians for nearly two decades.

“We just want to congratulate him on his winnings, to welcome him home,” said Stephanie Pepper Allen, a past senior regent with the lodge. “We want the public to come out and help us lift his spirits and let him know the community is behind him.”

The reception begins at the lodge at 1229 Calcote Loop NE at 5:30 p.m. on Wednesday, July 18, and lasts until 7 p.m. Cake and sandwiches will be served. Admission is free and encouraged.

“I have a lot of people back home supporting me, so it was important that I won it for them,” he said. “This was the biggest moment of my athletic career. It was amazing, and it was an awesome feeling to know that I had the whole community support and that I had a town in my corner. It was an amazing and blessed feeling.”

Lofton’s father, Charles Lofton, said the lodge’s homecoming for his son is special — Garrett was at the lodge when he first learned he’d made the cut to compete in the games in Seattle.

“If somebody wants to meet someone who is a true champion, they need to come meet Garrett,” Charles Lofton said. “He’s been humble in what he’s won, always shared his victory with his competitors, and he’s just an inspiration to me.”

The moose lodge began providing food for the competitors in the Special Olympics Mississippi Fall Games at Camp Shelby Joint Forces Training Center in 2002 and have been fundraising and contributing to the event every year. Lodge members knew Lofton’s family before, and their relationship with the family led to their support of the games.

Allen said the lodge raises and spends around $6,000 every year to serve at the games. The lodge’s fundraising for 2018 will begin next month.