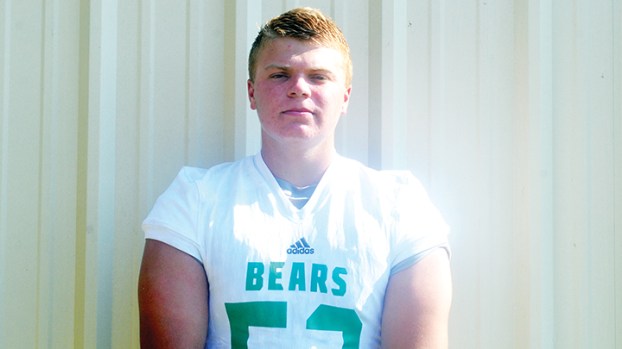 Photo by Collin Brister Grant Jackson will play on both sides of the football for West Lincoln in 2018.

Primetime 23: About to take a big step

West Lincoln lineman Grant Jackson has spent this summer improving in all areas of his game so he’ll be ready to go come August.

Jackson will play on both lines for the Bears this season, and he believes it will be a strong point with the experience they have in the trenches.

“We learned a lot over this summer and we work really well together,” Jackson said. “We work hard together and we study together.”

Teams altered their game plan to block Jackson last season. The rising junior has made sure he’s able to combat that by getting stronger.

“I want to make sure that I do whatever the coaches want me to do,” Jackson said. “Hopefully I pick up a few tackles along the way, but I want to do whatever they need me to do to win.”

The Bears finished second in their district last season and hosted a home playoff game for the first time in program history.

“I thought that we were a pretty good team last year,” Jackson said.  “I think that we can do better this season, though.”

West Lincoln head football coach B.J. Smithhart said Jackson has gotten better over time and he’s excited about what he can do on the football field.

“He’s a really athletic, big kid,” Smithhart said. “Sometimes it takes time for kids like that to grow into their body, but he has a great frame. He’ll be a division one football player. He’s still filling out. He’s gained so much strength this summer. I look at kids’ junior years for them to take a step, and I really think that he’s about to take a big step for us.”

Smithhart is in his second year coaching at West Lincoln, and Jackson said he’s thoroughly enjoyed playing under him.

“He’s a great coach and a great leader for us,” Jackson said. “I’ve learned so much from him since he’s gotten here.”

The goal for Brookhaven senior wide receiver John Hilbert this year is straightforward and simple. “We want to win the... read more