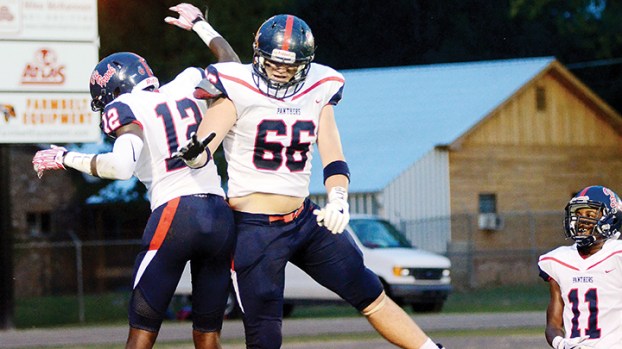 Daily Leader file photo Coker Wright (66) has made the switch from offensive line to the defensive line for the 2018 season.

Coker Wright will be one of the more experienced linemen returning for the Brookhaven Panthers this season.

After playing on the offensive line last year, and receiving considerable recruiting praise for his play there, the senior has made the switch over to the defensive line to help Brookhaven continue to be one of the better defenses in the state.

“I’ll do whatever we need to do so that we can win football games,” Wright said. “Whatever they ask me to do is going to be what I do. We want to win the state championship, and whatever it takes to reach that goal.”

The Panthers will have to replace their entire lines on both sides of the football, and Wright knows he’ll have to lead the players in the trenches throughout the season.

“I’m the only returning starter on both of the lines,” Wright said “We’re looking to make another run. We have the talent to do it. The guys that we have coming in and playing will be just as good as the guys that we had last year.”

The switch to the defensive line has been one which Wright said he’s enjoyed and is looking forward to when August rolls around.

“I played some on the defensive line last year, so I’ve got some experience there,” Wright said. “It’s really just getting back used to it, and it’s easy sailing as far as the transition to defensive line goes. I’m an offensive lineman at heart, but if we win football games with me being on the defensive side of the football, I’m all for that.”

The Panthers will have new leadership this year as Tucker Peavey returns to coach Brookhaven after Tommy Clopton took over as athletic director after the 2017 season. Wright said the transition to the new coach has gone well.

“We love coach Peavey,” Wright said. “He’s bringing tradition back to Brookhaven, and we think that we have a good shot at going back to the state championship for the first time since 2010.”

Primetime 23: About to take a big step

West Lincoln lineman Grant Jackson has spent this summer improving in all areas of his game so he’ll be ready... read more