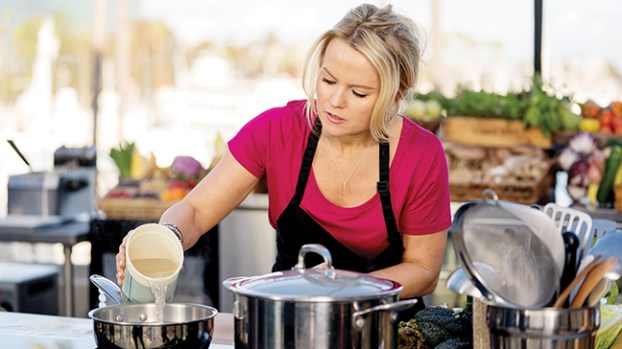 Photo courtesy of Food Network Star/Finalist Katie Dixon prepares a meal during the Shark Night Challenge. Dixon made it into the top five before she was eliminated. However, voting is still open for Fan Favorite online at foodnetwork.com, and the Brookhaven native remains in the lead.

Katie Dixon’s time in the Food Network kitchen has come to an end.

Dixon, 36, was eliminated on the reality cooking show “Food Network Star” that aired Sunday on the Food Network. The episode, “Shark Night Dinner,” will be rerun Thursday and Sunday at 1 p.m.

In the first challenge of the episode, the five finalists had to update their family favorites with a culinary twist. For Dixon, it was salmon and lentils, but the twist was to turn it into something fried. Dixon made lentil cakes, but forgot to add egg as a binder and they disintegrated in the fryer. In a last-ditch effort to save the meal, she remade the cakes and fried them in a cast iron skillet.

For the second challenge, Dixon selected to prepare the salad in a five course VIP dinner the finalists served at an aquarium to celebrate the 20th anniversary of “Shark Night.” Each dish featured a seafood component that was a favorite of their chosen species of shark.

Judges Giada De Laurentiis and Bobby Flay teetered between Palak Patel’s yellowfin soup and Manny Washington’s crab appetizer, but it was Dixon’s clam salad that they deemed the least favorite of the night. There was too much sweet dressing on it and not enough clam, De Laurentiis said.

“If it’s not messy you’re not doing it right,” host Alex Guarnaschelli tells Dixon and the other three eliminated finalists who were all fighting for “salvation” and another chance on “Food Network Star.”

“I am ripping and roaring,” Dixon tells viewers as she prepares her dish. “I was eliminated (from “Food Network Star”) because I tend to get overly excited and I need to hold a little something back.”

Dixon promised Guarnaschelli she’d up the cheese factor, even at the expense of her healthy point of view.

“Throw the health away. I’m doing some cheese,” she said.

But she bit off more than she could chew, literally, during the demo and she had to cover her mouth to speed through the presentation as she talked about the flavor in the quesadilla. Unfortunately, there may have been flavor, but there was no cheesy money shot.

“You were going super fast,” Guarnaschelli told her. “It was like a NASCAR rally inside your demo.”

A teary Dixon said her goodbyes at the end of the five minute webisode.

“I think the excitement got the best of me today,” she said.

Dixon is the daughter of Vickie and Henry Newman of Brookhaven.

A Crystal Springs man wanted by authorities in Georgia led troopers with the Mississippi Highway Patrol on a chase through... read more