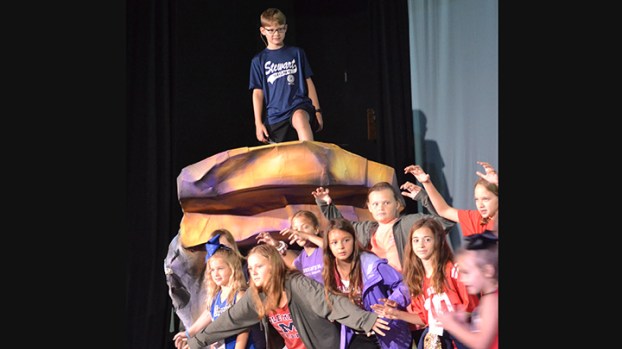 Photos by Donna Campbell Actors participating in BLT Kids Camp rehearse a big scene in “The Lion King Kids” Tuesday at The Haven. Tickets are still available for Friday shows.

The last production of this season for Brookhaven Little Theatre is almost one for the history books, but parts are already up for grabs for the next season’s first musical.

Seats are $10 for anyone who doesn’t hold a season pass.

Ninety first- through seventh-graders participated in the BLT Kids camp this month.

Auditions are set for BLT’s first production of the upcoming season, “Newsies.”

The theater is casting roles from all ethnicities, ages 10 and up. Gymnasts and acrobats are needed and encouraged to try out. Performers must attend both the dance call and the vocal call to be considered for any part. A resume and a headshot must be brought to the tryout.

BLT will be the first community theater in Mississippi to produce “Newsies,’ as Disney recently released the rights for the show, Waterloo said. The production will be directed by guest Nick Rocz.

Rights to the production were released in limited amounts, and theaters were required to apply for them. Theaters were chosen by size and admission percentage.

“I’m so excited, because we’ve done so many things to expand our theater,” Waterloo said.  “We’re able to look at shows we haven’t before.  I know the community is going to be thrilled and want to be part of the magic that is the theater.”

“Newsies” is only the first show for the 2018-2019 season.  The season reveal will be Aug. 11, and the other shows of the upcoming season will be named.  Season tickets will go on sale at the reveal party.