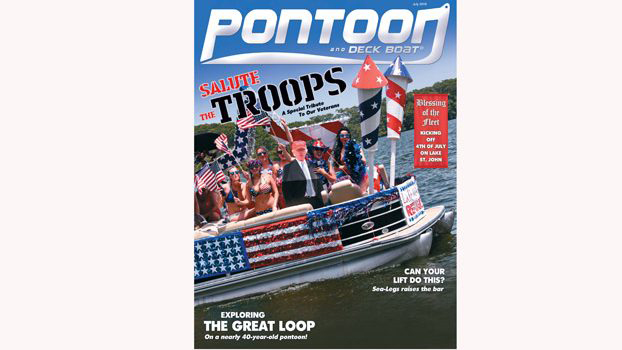 FERRIDAY, La. — Just about everyone in the Miss-Lou knows about Lake St. John, especially the fishing, swimming, water skiing and, of course, the Fourth of July Flotilla and Blessing of the Fleet each year.

Now, a broader audience knows about the hidden treasure of Lake St. John because the Lake St. John Fourth of July Flotilla and Blessing is featured on the cover of the July edition of Pontoon and Deck Boat magazine.

Scott Kimbrell of Natchez has had a weekend cabin on Lake St. John since 1986.

“The getaway is wonderful,” Kimbrell said.

For many years, Kimbrell said he had a ski boat.

“It sunk,” Kimbrell said, “and we ended up with a jet boat. That was fun, but as we got older, we bought a used pontoon boat.”

Kimbrell said the family enjoyed the pontoon boat so much, they bought a new one about six years ago and with the purchase, they got a subscription to Pontoon and Deck Boat magazine.

“They always had articles in the magazine about holidays at different lakes,” Kimbrell said.

Being the fan he is of Lake St. John, Kimbrell said he decided to pitch the magazine a story idea about Lake St. John’s Fourth of July Flotilla and Blessing of the Boats.

“I made up booklet with some friends on the lake,” Kimbrell said, adding his friends helped him with facts and figures about the lake and the Fourth of July celebration.

He then traveled to an event the magazine was sponsoring in Branson, Missouri, in 2014 and put the booklet he had created in the hands of the editor Brady Kay.

“I just knew when he turned around, he threw it in the trash,” Kimbrell said with a laugh, “but he didn’t.”

Kay said he was intrigued by Kimbrell’s pitch.

“He really sold me on it,” Kay said, “so I kept putting it off hoping I could cover this myself, but my travel schedule never lined up, so I assigned it to one of my best freelancers, Gini McKain. Gini has been working for us for close to 20 years. She was excited to cover it and Scott rolled out the red carpet treatment for her.”

“She was here all day Saturday and Sunday during the Flotilla and talked to people who live there,” Kimbrell said, adding McKain took thousands of pictures.

“The hardest part about running this story in our magazine was trying to decide on the photos,” Kay said. “Gini took a ton of great photos of people having a fun time on Lake St. John and the parade with all the pontoons looked especially fun.

“Our magazine is all about promoting the lifestyle and fun of boating and when I saw some of those parade photos, I knew we had to put one of them on the cover. It’s great to know events like this are still part of how we celebrate the Fourth of July in our country. What a great tradition.”

Now the July issue of Pontoon and Deck Boat magazine, with 85,000 print and online readers, features a cover picture and story not only on the Lake St. John Flotilla and Blessing of the Boats but also a side bar story about Natchez and the historic houses and tours in the city.

For more information about the magazine or to purchase a subscription, visit: www.pdbmagazine.com

From the Vicksburg Post VICKSBURG – Career changes can happen for a variety of reasons and at any time in... read more