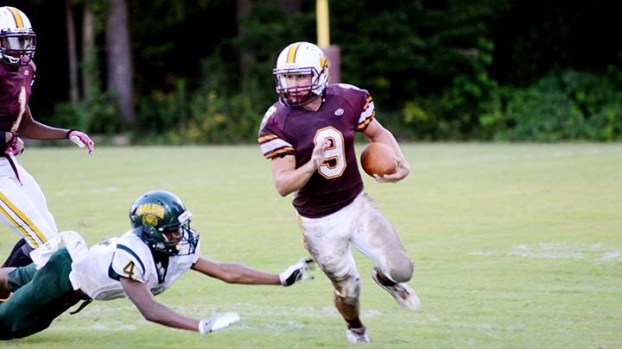 Daily Leader file photo/Tailor Young rushed for 400 yards in six games last season for Enterprise and recorded 30 tackles. Young had 53 tackles and five sacks during his freshman campaign in 2016.

Tailor Young has been counted on by Enterprise since he started playing as a freshman, and he’s delivered ever since.

The junior had a stellar freshman campaign when he racked up 53 tackles and five sacks on the year.

In his sophomore year, which was cut short due to a concussion, Young rushed for 400 yards and had 30 tackles on the season.

“I feel like I had a great season last year considering the injury,” Young said. “I had a great offensive line to run behind, and that really helped.”

Young said he and the Yellow Jackets are expecting a better year in 2018 because of the experience returning.

“We have a lot of good players back for us this season,” Young said. “We started off good last year, but some injuries hurt us. I think that with the returners we have coming back, we’ll have a pretty good year.”

The 1-9 season in 2017 tested the Yellow Jackets, but Young said it was a growing experience.

“It really showed what we were made of for us,” he said.

Young patrols the middle linebacker position for Enterprise, and it requires him to be the voice of the defense.

“I have to be the leader of the defense from that position,” Young said. “I try and boost the team up on defense. You have to study a lot of film at that position. Middle linebacker has the best spot on the field.”

Young said even though the Yellow Jackets are still somewhat young, he’s excited about the upcoming season.

“I think that we’re still pretty good,” Young said. “I’m grateful to be able to be part of this team. I feel like that we can play with the big dogs this year.”

As a junior, Young said he’ll have a leadership role on the team.

“I always felt it didn’t matter how old you were, that you could be a leader,” Young said. “You have to set the standards high and show the guys the right ways to do things.”

8U All-Stars finish 4th in state

The 8U All-Stars finished fourth in the state tournament.  read more