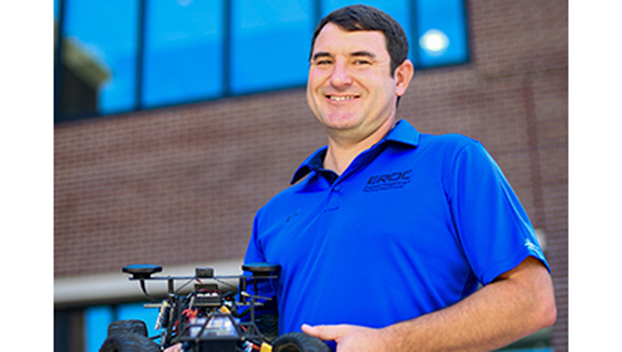 Shea Hammond, a wildlife biologist, is also the lead Unmanned Aerial Systems pilot and developer in the Environmental Systems Branch of ERDC. The UAS specialist learned about drones through a six-month course at the Hinds Community College Vicksburg campus in 2016. (HCC public relations/The Vicksburg Post)

VICKSBURG – Career changes can happen for a variety of reasons and at any time in a working man’s life.

For Shea Hammond, the reason was to hop on the latest wave of technology before it passed him by, with the help of the Unmanned Aerial Systems program at Hinds.

“It was time to see what I could do with drones, perhaps start a business and make money off this technology,” Hammond said recently from his office at the U.S. Army Engineer Research and Development Center in Vicksburg, where he works as a wildlife biologist and lead UAS pilot and developer in the Environmental Systems Branch.

The 42-year-old Greenville native had joined the U.S. Marine Corps right out of Vicksburg High School, where his family moved when he was 12. It was during his days in uniform as a reconnaissance officer that technology first spurred his career and became a common thread in each step of the way.

“While in the Marines, I got to play with some of the toys of the time,” he said. “It was when GPS was coming out and when people were just learning to send texts and other digital messages. It was also when I began working with thermal night-vision glasses.”

After leaving the Marines, he earned a master’s in biological sciences at the University of Southern Mississippi, then went to work for the U.S. Fish and Wildlife Service studying bats and managing caves in the Ozark Plateau National Wildlife Refuge in eastern Oklahoma. “I don’t mind getting rained on, getting muddy or being bit by bugs,” he said.

Over time, he saw the potential value in using Unmanned Aerial Systems, or drones, to do the kind of geospatial mapping that had been done for years using satellites in space. “An image coming off a satellite might be rather large, 30 meters by 30 meters per pixel, but one coming from a drone can be down to millimeters or centimeters in size per pixel. So, the resolution is much better and the questions you can ask from a biological standpoint become more resolute.

“I could see this wave coming with the technology,” he said. “So, my wife and I made a really tough decision, along with my mother-in-law who lives with us, to move back home to Mississippi and leave the comfort and security of working with the federal government so I could educate myself in this new technology.”

A few online searches and a conversation with Hinds’ UAS program director Dennis Lott helped him overcome his lack of experience with the aircraft, which have revolutionized aerial photography and related mapping technologies just in the past decade.

“I had no aircraft experience whatsoever,” he said. “I only had experience with the data.”

In a six-month span of time in 2016, Hammond took classes that covered the piloting, construction, design and practical mechanics of multi-rotor and fixed-wing drones. “I pretty much pitched a tent and lived there in the hangar,” he said.

“We learned the nuts and bolts of how these things work, plus take data with the kinds of sensors drones carry.”

Lott recognized the willingness of the ex-Marine – one with a master’s degree in one science already – to learn a whole new science and enhance an already impressive resume’.

“Shea Hammond was the perfect student,” Lott said. “He came to the Hinds CC Unmanned Aerial Systems program anxious to learn all he could as fast as he could. He never missed a class and always engaged in discussions. Not only that, but he expanded the discussion.”

ERDC’s interest in a sensor Hinds owned turned into a job opportunity for the budding UAS specialist.

“I happened to be there the day they came in to see what the sensor could do,” he said. “Down the road, they told me they were interested in thermal tracking. Turns out, they developed the toolkit and software I was using to track bats with in the Ozarks.”

His job at ERDC involves all the skills he learned in just a few months in the UAS program at Hinds. When it comes to the aircraft themselves, flying them might be the smallest part of it all.

“It’s one of the most interdisciplinary jobs you can have in any STEM career,” he said. “There’s the biological sciences, the geographical sciences, the mechanical and electrical engineering, and the software, since these are basically flying robots. Then, you also have to be able to write about the science. We have to work as a team to make these systems work. When you go to the field with them and they don’t work, you need to be able to fix them on the spot.”

Those skills are easily accredited to Hinds and the level of instruction he received in a short period of time.

“I didn’t initially see myself transitioning into a completely different field,” he said. “I’m not a bat biologist anymore – I’m a pilot, a roboticist and developer. And that wouldn’t have happened without Hinds. I get the opportunity each day to play with $250,000 aircraft with state-of-the-art equipment.”

NEW ORLEANS — Criminals involved in a carjacking Sunday night in Marigny reportedly robbed a man and then demanded a... read more