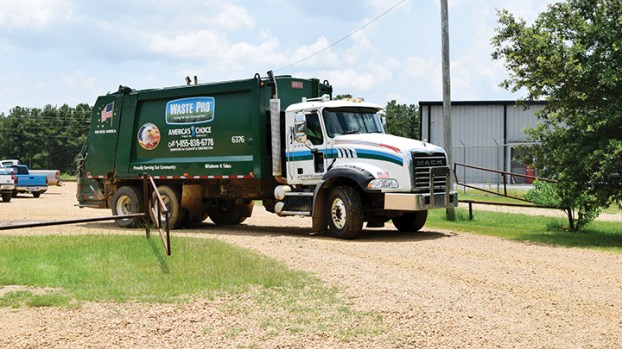 Lincoln County supervisors were hoping their new solid waste company would ride to the rescue and save them from picking up behind Waste Pro, but they’re on their own for the next 10 weeks.

Arrow Disposal Service Inc. Vice President of Governmental and Public Affairs Jimmie Moore told supervisors in a special-called meeting Wednesday his company could not begin collecting trash before its Oct. 1 start date due to the potential for violating contract interference laws protecting Waste Pro’s contract, which runs through Sept. 30. Moore said his company would immediately order new trucks for October and begin hiring as soon as possible, but in the meantime, all he can offer Lincoln County is hope.

“I don’t think your current contractor will let this continue without correcting whatever issues you have from the corporate level,” he said. “No company wants this level of bad publicity, to lose two contracts in the same county. I wish I could tell all of you today next Monday we’ll start picking the garbage up, but I can’t do that.”

Supervisors hoped ADSI would start work ahead of the Oct. 1 contract date to take over for Waste Pro, whose long-occurring problems with trash collection have intensified to new heights following the loss of both the county and City of Brookhaven contracts. Supervisors say Waste Pro’s employees are leaving the company to seek new jobs now that it’s clear the company is leaving town, leading to missed pickups, angry citizens and supervisors running garbage routes.

Supervisors on Tuesday enacted a “cure breach” clause in their contract with Waste Pro that gives the company 15 days — until Aug. 2 — to correct problems with its service before being found to be in breach of contract, which would allow the county to terminate the agreement.

But with ADSI unable to move in before Oct. 1, supervisors will not terminate Waste Pro. Instead, they will begin deducting their trash collection expenses — time, labor, fuel and any special equipment rental costs — from the company’s more than $84,000 monthly payments. The county owes Waste Pro more than $337,000 for June, July, August and September, and on Monday decided to delay June’s payment until a reimbursement scale could be ironed out.

If Waste Pro doesn’t tighten up by Aug. 1, those expenses could be deep.

Lincoln County Tax Collector Blake Pickering, whose office records missed pickups, said Waste Pro has missed around 700 pickups in the last 30 days. Supervisors have had to drop their other duties, hitch up flatbed trailers and go house-to-house to empty ignored garbage cans.

District 5 Supervisor Doug Falvey said Waste Pro missed 411 homes on 34 roads in his district last week. He said Monday he and his crew went collecting and picked up three tons.

Aldermen say the same problems are occurring in the city — Ward 6 Alderwoman Shelley Harrigill attended Wednesday’s meeting and gave the board a list of missed pickups in her part of town.

“They’ve missed 50 streets,” she said. “For three days I’ve driven up and down the ward, and there’s nothing but trash. Every resident has a filled can in their driveway.”

Brookhaven Mayor Joe Cox also attended Wednesday’s meeting. He said the city was ready to sign its contract with ADSI effective Oct. 1 — supervisors signed off at the start of the meeting — and he wanted to hear supervisors’ ideas for getting by until then.

“Waste Pro’s reputation is at stake. Surely they understand if they’re ever going to be in business in this part of the country, they have to rectify this,” he said.

If Waste Pro doesn’t shape up, the county and city have each other’s backs.

Lewis said he would stash eight of the haulers at the trash transfer station beginning Wednesday, telling supervisors they could leave full trailers there and haul away empty ones to keep trash collection moving.

Supervisors could also rent specialized equipment to make the pickup process easier. Donnie King, with Magnolia Disposal Service, told supervisors he would offer roll-off dumpsters for $150 per pickup if they wanted to keep large bins at the district barns to pile up collected trash or as a dumping spot for citizens who ask to bring in their own garbage — Pickering said many of the calls his office receives now are from people looking for a disposal site.

The county would also have to pay a per-ton price for emptying the dumpsters, but King said he would deliver them to the barns for free.

The question about using inmates to run garbage routes came up again, and Lincoln County Sheriff Steve Rushing again said the Mississippi Department of Corrections barred the practice after an inmate was struck by a vehicle and killed on a garbage route last year.