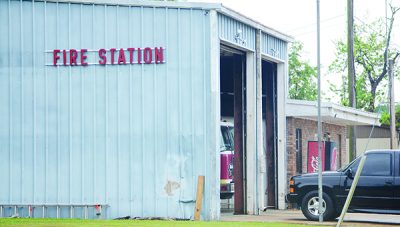 Daily Leader file photo Brookhaven Fire Station 2, which was built in the ‘70s, faces obstacles due to age.

While the money for a new fire station isn’t exactly burning a hole in anyone’s pocket, it’s there ready to use if Brookhaven aldermen can ever decide where to build it.

About a year and a half ago, aldermen accepted a $625,000 state grant to replace Fire Station 2 on Willard Street. Tuesday night, a majority of the board voted to allow Mayor Joe Cox to negotiate the purchase of land to become the firefighters’ new home.

Ward 2 Alderman Shannon Moore voted against the motion made after a closed-door executive session. Ward 3 Alderwoman Mary Wilson was absent.

The firehouse sits on the edge of Ward 1, directly adjacent to Ward 2, and serves the eastern portion of the city.

Ward 1 Alderman Dorsey Cameron has spoken often about the need for a new station on the east side of Brookhaven.

Fire Chief Tony Weeks, Cox and several aldermen have made various location suggestions over the past two years, but a final decision has never been reached.

As of February, it had been six months since the board last discussed the station move, and had most recently considered a spot on North First Street.

The location of the land under consideration for the fire station was not disclosed in the meeting.

The current station — a metal building constructed in the 1970s — has suffered a series of maintenance issues over the years. When the project was first proposed, Weeks recommended that the new station be built larger than the existing facility. He said city fire trucks are barely able to fit into the current structure’s bays.

Cameron said in February the board hopes to position the new firehouse on a lot large enough to accommodate any necessary, future expansion.

In other business Tuesday, aldermen voted to:

• Approve employment of Taylor McCardle as a certified firefighter at a salary of $30,402 annually.

• Approve employment of Willie Sinclair in the street department as a CDL driver at $10.89 an hour.

• Approve employment of Joshua Nations as a part-time police officer at a salary of $15.97 an hour as a fill-in patrolman.

• Approve the resignation of Jarish Harris, a truck driver with the street department, effective July 27.

• Approve the promotion of firefighter Samuel Brister to lieutenant at a salary of $43,028 annually.

• Approve the payment No. 4 to Greenbriar Digging Services for $748,443 for work completed on the 2015 SRF Water and Sewer Improvements.

Today is the last day to donate school supplies and gently-used clothing for a giveaway hosted by Brookhaven Ward 2... read more