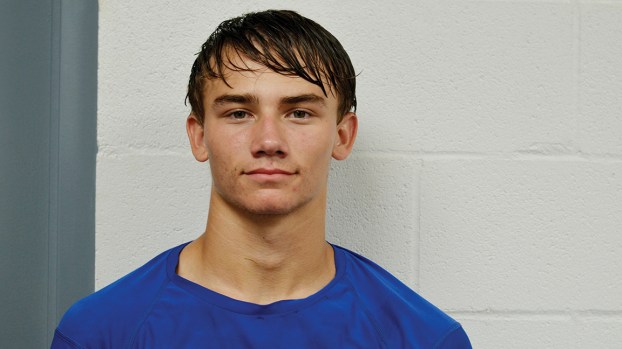 Photo by Collin Brister Senior Cobra Jim Guess had 79 tackles and 4.5 tackles for loss along with two fumble recoveries for Wesson last season.

Jim Guess has been the leader of the Wesson defense for a few years now, and Cobra head coach Jeremy Loy is excited to have him back for his senior year.

“He’s the hardest working and the most hustling kid that I have ever coached,” Loy said. “His first snap of the game and his last snap of the game do not look any different. He’s 110 percent all of the time. He doesn’t say a whole lot. He’s going to beat guys bigger than him, and if he gets beat he’s not going to get beat twice. He finds a way.”

The senior linebacker said he’s excited to get back onto the field for his senior season.

“Last year we played in a lot of close games,” Guess said. “We did good in the first and second half and couldn’t finish.  This year we have a different attitude, and we’re more experienced this season.”

Loy said the senior linebacker is one of the best players he’s coached over his career at Wesson.

“He’s a tackling machine, and if he gets to you, he’s tackling you.  Our players know that they’re going to get his best every single snap. He’s been an absolute joy to be around and coach.”

Guess and the Cobras are looking to put a winning season in the record book in 2018, and he knows as a senior he’ll have a big say in that.

“You never really know who’s going to be watching you, so every time you have to make sure you’re doing your best,” Guess said. “We definitely want to make the playoffs and have a winning season. We just want to make a good run from there.”

Primetime 23 is a list of the top players to watch ahead of the 2018 football season. Jaquavion Harris will... read more