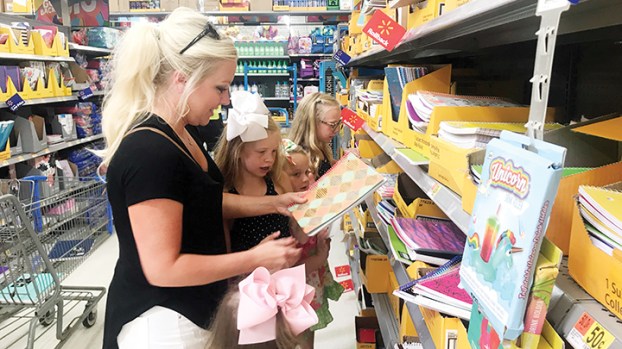 The fifth-grade teachers at Lipsey Middle School are pretty chill when it comes to school supplies.

They leave a lot to parents’ discretion, asking for items like “erasers,” “two packs of loose leaf paper” and some “number 2 pencils.” That lack of specificity results in one of the cheapest back-to-school shopping lists in Lincoln County this summer, totaling up to $30.28.

It costs more than three times that amount to equip a third-grader for West Lincoln Attendance Center. Those teachers require Ticonderoga pencils and wide-ruled paper, and the three-ring binder has to have a clear plastic cover. Add in cardstock, colored copy paper and some other specific items, and it costs $110.34 to grab everything on the West Lincoln third-grade supply list.

“These lists are created out of necessity by the teachers in the classroom,” said Bogue Chitto Principal Scott Merrell. “There’s no real requirement for people to bring in all of the things we ask for, but these are helpful to the schools. Considering budgetary constraints, it’s hard for us to commit to buying a lot of Clorox wipes to fight the flu, so these lists are a shared effort in the community.”

Countywide, the average school supply list is $67.93, with West Lincoln’s third-grade list being the only tabulation to reach triple digits and Brookhaven’s fifth-grade list one of only two to come in under $40 — the other was under by 10 cents and belongs to Brookhaven’s sixth-grade class.

West Lincoln also has the highest per-school average, with its eight lists ranging from kindergarten to junior high coming out to $76.72. Loyd Star’s K-6 list averages $73.53, and the same grades at Enterprise require an average expenditure of $66.58. Bogue Chitto has the cheapest average in the county at $63.49, and Brookhaven schools, from preschool to sixth grade, average $58.33 per student.

“When we ask for school lists, we ask the teachers to make a very concerted effort not to include anything on the list that isn’t necessary,” said Loyd Star Principal Robin Case. “These lists are to let parents know what their child needs for the entire year — we’re not going to come back and ask for more later. We know it’s a hardship financially for some families, and we’re not going to beat anybody up if they can’t provide it all.”

School supply lists are put together by all the teachers in a grade and passed on to principals for review. Principals forward the lists to the school board, which grants final approval.

Generally, supply lists for students in lower grades required the most items, while older students were given more leeway in their preparation.

That wasn’t always the case, however — Loyd Star sixth-graders are asked to buy a dozen packages of notecards and a pair of five-subject notebooks for a total of more than $25, a quarter of the whole $94.41 list. In the other direction, Enterprise kindergartners are asked to bring in the cheapest kindergarten supply bag in the county from a list that names few brands and asks for no cleaning supplies.

The Daily Leader compared all 38 public school supply lists, ranging from preschool to junior high, across the Brookhaven and Lincoln County school districts. The list was priced using Walmart.com, but some exceptions were made to err on the cheap.

For instance, the website promotes expensive, oddly-sized notebook paper at the top of every search, so a price of $1 was substituted in anticipation of sale prices at the store. Whenever a list required “adequate supplies” of anything, smaller, cheaper items were used.

Likewise, cheaper, generic-brand items were selected whenever supply lists did not specify certain brands, like Equate instead of Clorox, or USA Gold instead of Ticonderoga.

Prices given include all “optional” items on each list, such as paper towels and cleaning supplies.

The prices quoted in this story are subject to change, depending on sales and availability, and could be found for different prices at other stores — Walmart was used to price out the list because it is the most-visited location in Brookhaven for purchasing school supplies. Some items used in the list may no longer be available in-store.

All 38 lists and their projected prices are listed below, in grade order.

Brookhaven police made one arrest immediately in a shooting that wounded a young boy last week, but are hoping other... read more