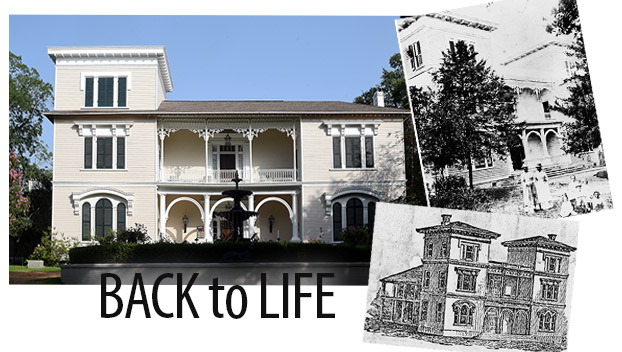 The Towers owners Ginger and James Hyland have recently replaced one tower, at left, and plan to build the second tower in the fall. A historic photograph of The Towers, at right top, taken circa 1890 shows the two towers that were once a dominant feature of the mansion. A catalog from Hinkle, Guild & Co. in 1862 featured a drawing, at right bottom, of the house designed by J. Edwards Smith, who also designed Magnolia Hall Christ Church and Zion Chapel. (The Natchez Democrat)

Back to life: Owners returning towers to Natchez landmark house

NATCHEZ — Last April, the owners of The Towers — Ginger Hyland and her husband James — set out to restore the antebellum house to its former glory by giving back the structure’s namesake, the towers. That project is half completed now.

“It’ll be nice to stop having to explain why it’s called ‘The Towers,’” Ginger Hyland said. “The historical value and the uniqueness of the look makes it a draw for the antebellum community.”

The original structure was created in three phases, Hyland said, beginning in 1798 and resuming in 1826 and 1858. The house once displayed a unique and identifying trait, symmetrical towers on either end of the structure. In 1927, a fire in one of the towers reduced it to ash, and the house owners at the time had its mate removed that same year to maintain the house’s symmetrical look.

Hyland grew up in California and is a collector of antiques. Approximately 12 years ago, she and James began their search for a historic Natchez house. They purchased the Towers in 2006.

Hyland said she is happily anticipating the finished look when she can finally see with her eyes what could once only be seen in black-and-white photographs. The project to restore the second tower, she said, will resume this fall when the weather is cooler.

“We completed the first tower at the end of June and will start again on the first of October,” Hyland said. “We will be finished with the second tower, hopefully, by Christmas.”

Although the new towers will not contain accessible bedrooms like the original design, Hyland said the outward appearance is being kept “as close as we can get it,” she said.

Hyland said she and her husband have put a lot of work into the house to restore it to its pre-Civil War glory, and said the renovation has been worth every penny invested.

She said antebellum houses add to the historic value of Natchez, which draws visitors and helps the community.

“There’s a lot of satisfaction in bringing something back to what it was,” Hyland said. “It is worth it. … My husband, James, strongly influenced me to do this and he was absolutely right. I’m so excited, and I think this will be a great legacy for us and for the Natchez community.”

He put in around noon on Friday. Summit’s Donald Broussard backed his 16-foot SunCatcher pontoon off the trailer and into... read more