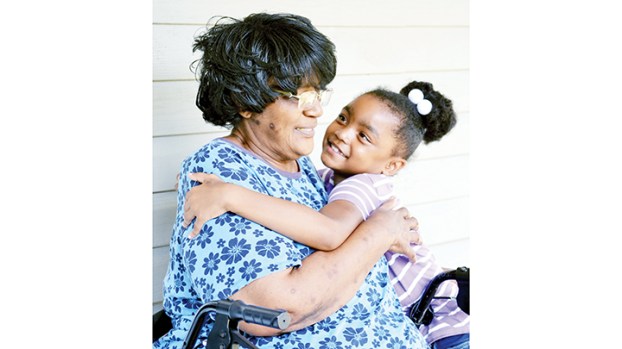 Photo by Donna Campbell Vondell Brown says her granddaughter, C’aria Brown, is her hero. The young girl called 911 for her grandmother Thursday morning when her blood glucose level dropped below 50 mg/dL, possibly saving the woman’s life.

Brookhaven Elementary third-grader is a hero to her grandmother

It’s been a busy summer for C’aria Brown.

She celebrated turning 8 with a pizza party Saturday and she lost a tooth Friday, prompting a letter to a fairy. But neither of those compared to Thursday when the young girl saved her grandmother’s life.

“She’s my hero,” 72-year-old Vondell Brown said, choking up and grabbing for the young girl’s hand.

Brown is diabetic and Thursday morning, her blood glucose level dropped below 50 mg/dL. But she didn’t know she was close to slipping into a diabetic coma.

She and her granddaughter watched TV hours before — game shows, cartoons and C’aria’s favorite, “Walker, Texas Ranger.” Brown stayed up until about 1 a.m., took a bath and then headed to her bedroom where her granddaughter had already gone to sleep. She couldn’t remember where her nightgown was — she was having trouble thinking straight, she said. She felt lightheaded and fell asleep without finding her gown.

“I thought, ‘Maybe I’m fixing to leave this world, maybe I’m having a stroke,’” she said. “I tried to reach over, and when I’d touch her, she’d get over in the bed,” Brown said.

Brown tried for 15 to 20 minutes to wake her granddaughter, but the sleeping girl knew that a poke in the arm in the middle of the night meant to scoot over onto her side of the bed. So she did without waking up.

Brown finally used a hangnail on her finger to scratch the girl’s arm.

“Her fingernail dug up into my arm and I woke up and said, ‘Ouch!” C’aria said. “She was just pointing and couldn’t talk.”

C’aria gave Brown a piece of paper and a green marker.

It looked like squiggles, but C’aria deciphered it and grabbed her grandmother’s cordless telephone — Brown still has a landline — and called her mother, then the police. A 911 call was received Thursday morning about 4:30 a.m., dispatch records show.

The daughter of Kimberly Brown and Shawn Smith, of Brookhaven, admits she was scared.

“Mama told me to take some breaths. I was freaking out,” she said.

But C’aria, a third-grader at Brookhaven Elementary, is a smart kid. She helped her grandmother get dressed and waited for the ambulance to arrive.

“She saved my life in a way,” Brown said. “I want her to know I love her, but she already knows that.”

Story and headline corrected to show that C’aria Brown is a Brookhaven Elementary third-grader.

The fifth-grade teachers at Lipsey Middle School are pretty chill when it comes to school supplies. They leave a lot... read more