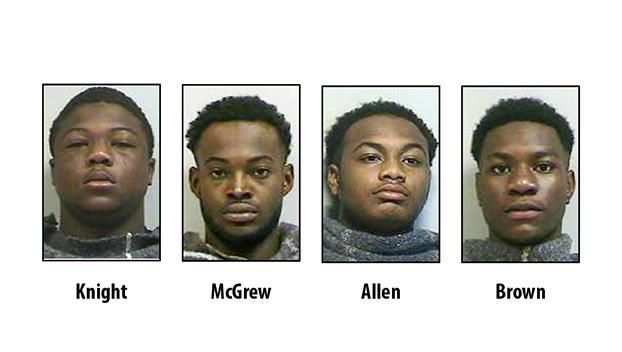 NATCHEZ – Three people have been arrested in connection to an early Sunday morning drive-by shooting that killed a pregnant teenager and her unborn child and injured another person.

Police are still searching for a fourth person in connection to the crime.

Arrested are Montreal Rashawn Brown, 17, Curtavius Dantrell Knight, 19, and Nicholas J. McGrew, 21, all of Natchez. Each is charged with aggravated assault, drive-by shooting and the murder of both 17-year-old Shakerria King and her unborn child.

A fourth suspect, Carianta D. Allen, 17, of Natchez is still at large, and he is wanted on charges of aggravated assault, drive-by shooting, murder of an unborn child and murder.

Natchez Police Chief Walter Armstrong said an autopsy revealed that King was pregnant at the time of her murder.

Law enforcement officers worked around the clock to make the arrests, Armstrong said, and vowed they will arrest Allen.

“I want it to be known,” Armstrong said, “as it relates to these four individuals, anyone caught harboring Allen will be charged. He should be considered armed and dangerous and anyone that sees him should call police immediately.”

Armstrong said he would prefer people call the police department directly with information at 601-445-5565, but the Crime Stoppers program is available at 601-442-5000 for people who seek to remain anonymous with information and a reward is paid upon a successful conviction.

“Wherever we pick him (Allen) up, we will bring them in with us,” Armstong said of anyone who is harboring Allen. “We will find him. This is a serious crime, and he needs to be arrested.”

Armstrong said early investigation reveals the crime may be in retaliation for the shooting death of Martez Brown who was killed July 8 in the 300 block of Dumas Drive, Natchez. Officers also believe Brown’s murder was retaliation for a May 2017 aggravated assault and shooting in which Brown was allegedly involved.

“It is a vicious cycle,” Armstrong said. “Young people, if they get offended, are not contacting the police like you and I would do, but instead are taking it on themselves, getting guns and going out and killing people.”

Armstrong urged parents to pay more attention to their children’s lives and to instruct them in the proper way to handle misunderstandings.

“This is a problem all over the country,” Armstrong said. “It is up to everyone to do their part, get involved with their families lives, get in their heads and minds, give them advice and instructions on how to deal with conflict. It is never good to respond to violence with violence. These young men face life in prison or possibly even death, and we plan to pursue the charges to fullest to see that justice is done.”

NATCHEZ — A short video featuring a Natchez woman and her dreams to become the first African American female to... read more