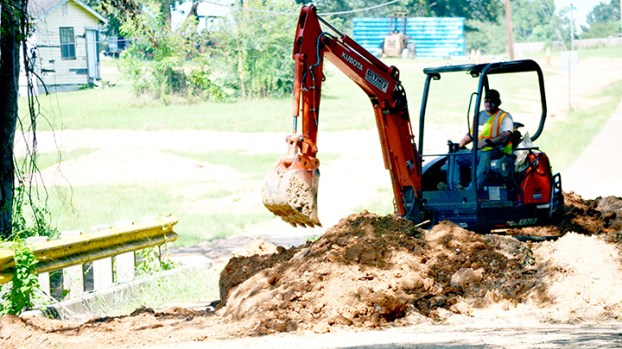 Work has begun to repair two bridges on city streets in Brookhaven — projects that will cost taxpayers more than $310,000.

Workers with Deviney Construction were removing AT&T lines Tuesday at the Williams Street bridge so that Oddee Smith Construction can repair and expand the size of the bridge.

Oddee Smith was the low bidder when bids were opened July 12. Board members approved their bid at the July 17 meeting.

The bid came in at $212,016.68, which is slightly over — by just .7 percent — Dungan Engineering’s estimates, said Ryan Holmes, a principal with Dungan.

Two bids were received, however, one was discarded due to irregularities in the bid, he said. Oddee was still the low bidder either way.

The repair at the Meadowbrook Drive bridge should begin in another week or two.

Three bids were received for that project, with Greenbriar earning approval with its low bid of $98,300, which is 12 percent under Dungan’s estimate.

Ward 1 Alderman Dorsey Cameron asked if the city might receive any financial aid from the state for the bridge repair.

Holmes said that he’s anticipating a special session of the state Legislature to be called in August and he hopes road and bridge funding will be discussed.

“Our hope is that they do take up some funding for cities and counties. We’ve all been pushing for that for four or five years,” Holmes said. “Hopefully that will be the topic for the special session.”

Cameron asked why the Williams bridge project cost more than double that of the Meadowbrook project.

Holmes explained the bridge is being rebuilt larger.

“It’s a two-span bridge that’s there now, and to handle the amount of water that comes through there we’re going back with a three-span bridge. It’s a much larger bridge,” he said.

Ward 4 Alderman Jason Snider asked if there was an inspection schedule in place for city bridges.

The Meadowbrook bridge, at 19 feet, fell below the inspection requirements by the state, Holmes said.

“Bridges like that, that are 20 feet or less, are not on an inspection cycle,” he said. “There’s quite a few in the city that are on an actual inspection cycle. We’re required to inspect them and reports are done. There probably are a few small, what we would consider small, structures that may not be inspected on an annual basis. But we definitely can look at anything that may be a concern.”

“We kind of stumbled on it,” Grice said. “They didn’t inspect it because it wasn’t required. (Public Works Director) Keith (Lewis) was checking the ditch over there when he found this one. They closed it that day because it was caving in on one side. I’m just glad a homeowner called wanting a ditch cleaned out over there and we caught it.”

Holmes said there are 13 bridges in the city that are on the state’s required inspection list.

The familiar red choo-choo that chugs around Exchange Club Park during the annual fair got a makeover during the summer.... read more