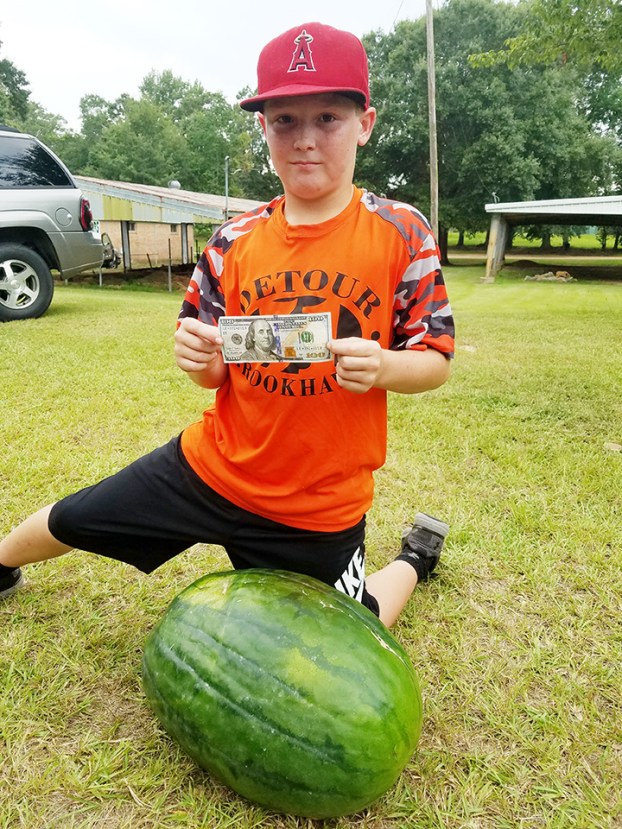 A single watermelon seed could earn a green-thumbed fifth-grader a green Ben Franklin.

That $100 bill is the top prize in the annual competition sponsored by the Lincoln County Master Gardeners each year. Weigh-in is Aug. 4 from 6-8 p.m. at the Exchange Club Fair.

Master Gardeners gave out bags of Congo watermelon seeds in April to fourth-graders in Brookhaven and Lincoln County schools, Brookhaven Academy and homeschoolers with a short list of instructions for planting. Some of those students may start fifth-grade a bit richer.

The Master Gardeners’ goal was for the students to take the 15-19 seeds they were given and grow melons — the bigger the better. Through the process, they’re hoping to get a younger generation interested in horticulture.

The melons are judged based on weight and the heaviest wins, organizer Steve Edge said.

New this year, the Exchange Club is getting involved and wants to encourage participation by giving each fourth-grader who brings a watermelon to the weigh-in a free armband good for unlimited rides that night.

The Exchange Club is also providing a $25 gift card for a girl and boy from each school who enters the largest watermelons from their school.

Mason White took home the top prize last year with a Congo melon that weighed more than half as much as he did — 43 pounds.

Weather for the past 90 days has been ideal for watermelon-growing.

“This year’s been just about right,” Edge said. “Nothing to complain about. Good rain when we needed it and it hasn’t been too blasted hot.”

Edge planted some Congo seeds in his own garden when he and other gardeners gave them out to hundreds of students three months ago. He’s got a few 35-pounders ready to pick so he’s hoping to see some record-breaking melons at the weigh-in.

Last year’s second place winner was Gatlin Guynes of Bogue Chitto Attendance Center, who received $50 for his 34-pound watermelon, and Noah Davis, also of Bogue Chitto, who won $25 for a 22-pounder.

Work has begun to repair two bridges on city streets in Brookhaven — projects that will cost taxpayers more than... read more