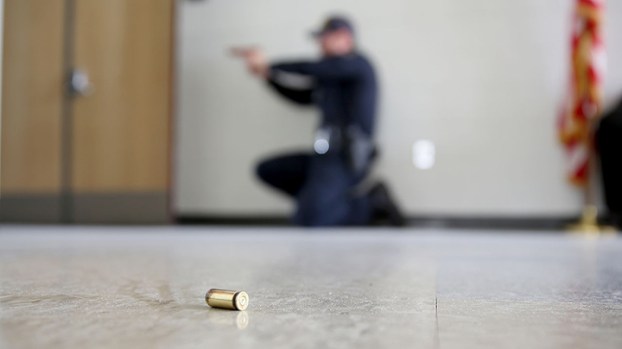 Blue lights will flash and sirens will wail Friday morning in Monticello, and law enforcement agents will take down a shooter on the campus of Lawrence County High School.

Fortunately, it’s all part of the training Sheriff Lessie Butler said his deputies and other first responders in the city and county need to have.

The active training exercise is planned for 9 a.m. Friday. A command center will be set up either at the high school or Wilson Funeral Home nearby.

Butler said deputies haven’t trained for an active shooter on a school campus.

“We haven’t had one of this nature,” he said. “I just got to thinking, the chaos I had with the Frog Ridge (Road) situation, something could happen at the school because we have a lot of juveniles ending up in juvenile detention over little bitty stuff.”

In December, Lawrence and Lincoln county deputies were joined by other law enforcement agencies as well as Mississippi Highway Patrol SWAT units and volunteer firefighters to track Tony Wilson, who was suspected of shooting to death his neighbor, Henry Peavey, over a land dispute and then setting Peavey’s mother’s house on fire with him inside. He also set fire to Peavey’s home down the street with Peavey’s wife, Kathryn, in it. Wilson died from a self-inflicted gunshot less than two weeks later after a SWAT team surrounded the camper where he was hiding.

Butler said the scenario at the high school will be that a suspect entered the campus and shot several students and possibly teachers. Those participating in the training includes sheriff’s deputies, police, AAA Ambulance, Lawrence County Hospital, Mississippi Department of Wildlife, Fisheries and Parks, volunteer firefighters and other first responders. Surrounding counties may also send officers.

Administrators will be at the high school to watch.

“The administration will be on sight to observe and take pointers from these agencies in order to better protect our students,” Fairburn said.

Emergency Management Director Tony Norwood said training like this helps get agencies on the same page.

“If something like this happens, I feel like we need to be prepared for it, or as prepared as we can be.”

A single watermelon seed could earn a green-thumbed fifth-grader a green Ben Franklin. That $100 bill is the top prize... read more