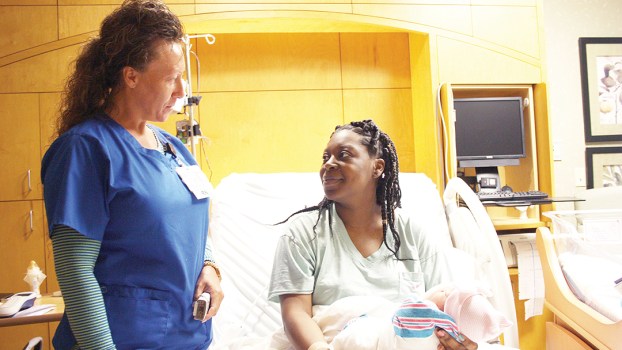 A far-reaching investigation into delivery rooms has found many hospitals fail to take simple steps to monitor and protect the lives of mothers giving birth, but King’s Daughters Medical Center in Brookhaven has been paying attention to the little things for years.

A USA Today investigation that reviewed a half-million pages of hospital quality records at facilities across four states found fewer than half of maternity patients were promptly treated for bleeding and blood pressure fluctuations that put them at risk for stroke or even death, as doctors and nurses relied on observation and judgment calls, instead of hard data, when making treatment decisions. The investigation pointed to a lack of standardized procedures for maternal care as part of the problem, as treatment is administered based on varying factors from facility to facility, and doctor to doctor.

But Angie Williamson, LDRP director at KDMC, said her staff has been collecting, measuring, weighing and calculating proper treatment start times for years. The hospital’s participation in a new statewide effort to standardize those treatments is helping keep Mississippi ahead of the national curve for maternal care, she said.

“All of the (hospitals in the) state are now going to these quality collaboratives, and Mississippi got on this quicker than most other states did,” she said. “We lead the nation in everything bad, and we decided we didn’t want to lead the nation in mommas dying.”

KDMC is part of the Mississippi Perinatal Quality Collaborative, a statewide effort to shift to evidence-based procedures to oversee and protect the health of newborn babies and their mothers. The program seeks to cut down on preventable conditions that can injure or kill mothers who have recently delivered by measuring blood loss, the timely administration of blood pressure medicine and other steps.

It could be why Mississippi, a historically unhealthy state, has nevertheless managed to stay off the bottom of the pile in maternal deaths. The state records between 20-29 maternal deaths per 100,000 births, which puts it in the middle of the pack nationally. Georgia, Indiana, Louisiana and New Jersey lead the nation, with more than 40 maternal deaths per 100,000 births, according to USA Today’s analysis of data from the Centers for Disease Control and Prevention and other health-focused organizations.

Williamson said maternal fatalities have been on the rise since 2005, and the data shows it. America leads the developed world, by far, in maternal deaths with 26.4 per 100,000 births. Canada, England, France, Germany and Japan are all under 10, according to the Global Burden of Disease 2015 Maternal Mortality survey.

An estimated 50,000 mothers are injured during childbirth each year, and more than 700 — two every day — die.

KDMC follows a handful of small, straightforward steps to keep reliable data on its maternity patients. One of the most important is a maternal hemorrhage protocol that tracks a mother’s blood loss by using a precision scale to weigh blood-soaked pads, towels and sponges, Williamson said.

“Historically, people would estimate blood loss visually, but now we have instituted quantitative blood loss — we weigh every drop,” she said. “There is no longer a guess. It is a true milliliter count of actual blood loss.”

The hospital also keeps a “hemorrhage cart” for bleeding emergencies, and the cart contains a pair of Bakri tamponade balloons that can be inserted into the uterus and expanded with fluids to act as a compression bandage inside a mother’s womb.

The balloons can be left inflated for up to 24 hours to staunch internal bleeding, plenty of time to administer a blood transfusion or transfer a mother to the operating room if needed.

“It saves so many women, nationwide, from having to have a hysterectomy, or at the least having to have several units of blood or platelets,” Williamson said. “They’re about $300 a piece, but when you need it, thank God you’ve got it. We keep two at all times on the cart, and we have had to use them in the past.”

KDMC also has a “massive transfusion protocol” that alerts all areas of the hospital — anesthesia, lab, pharmacy — to the need for a blood transfusion so personnel can respond with needed medication. The hospital follows recommendations by the Association of Women’s Health, Obstetric and Neonatal Nurses, and the American College of Obstetricians and Gynecologists that require extended hours of post-delivery recovery time.

Williamson said KDMC also guards against preeclampsia — a pregnancy disorder that causes high blood pressure and can damage internal organs, or lead to stroke — by using an algorithm that mandates when measurements are taken and drugs administered.

“Unfortunately, in the South you have a lot of gestational hypertension and a lot of preeclampsia patients. Because of all that experience, we are well-versed in handling those cases,” she said.

KDMC is in its third year participating in MSPQC, but the changes it’s made to conform to the program have had little effect on the doctors who deliver in the LDRP, said Dr. Kim Sessums, OB-GYN.

“There are standardized protocols, and we’ve gone by that the whole time we’ve been here,” he said. “Brookhaven OB-GYN Associates is in full support of KDMC and the LDRP administrators to meet the standards and criteria, and we will continue to practice at a high level.”

David Culpepper, KDMC’s marketing director, said some of the maternity care procedures are not cost-effective, but are best for the patient.

A Jayess woman remains in intensive care at a Jackson hospital after her boyfriend shot her then killed himself in... read more