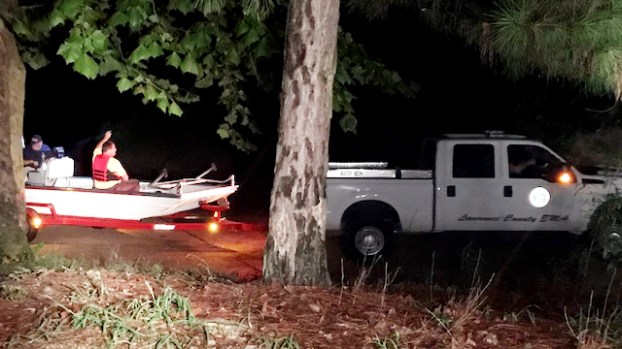 Lawrence County boats to the rescue

A fun time on the Pearl River over the weekend turned into a wet adventure one group of Lawrence Countians won’t soon forget.

Rescuers with Lawrence County Emergency Management and the Mississippi Department of Wildlife, Fisheries and Parks saved a group of about six people who had gone out Saturday to ride side-by-sides — off-road four-wheelers — on Hall’s Creek.

It rained while they were out joyriding on the river and the water rose quickly.

“It does this fairly regular when we have major flooding,” said EMA Director Tony Norwood.

That’s what happened when that area experienced an afternoon thunderstorm Saturday.

“It hovered over us and dropped about two to two-and-a-half inches of water in about an hour,” he said.

And even though the teenagers and young adults considered themselves river rats who had ridden Hall’s Creek on side-by-sides many times before, they weren’t prepared for the swift rise.

“When they realized it was rising, they tried to get out,” he said.

They were on Hall’s Creek about four sandbars — roughly 300 yards — up from the Pearl River.

One of the two side-by-sides went under and flowed downstream. One of the young men got caught in the current and grabbed a tree to pull himself out, but it broke and he fell back in. He was finally able to get onto a bluff with his teenage brother.

Norwood said one of the young women in the group used her cell phone to call 911.

“They couldn’t follow the creek because it was so swollen and up out of the banks so heavy,” he said. “And they were barefooted and couldn’t walk through the woods. They did the best thing, and that was to get on high ground and call for help.”

Game wardens Mike Jones and Jake Guess cut their way to the group through the woods using a hand-held GPS to find their exact location and cane-cutters to clear the way. It was about 220 yards to clear a path.

“They walked straight to them,” he said.

They walked them back to Hall’s Creek to the Pearl River and then they rode in the Lawrence County rescue boat to Atwood Waterpark. If they hadn’t walked to the boats, they would have had to walk about two miles to Hwy. 587, he said.

“They were all very happy to see us,” Norwood said. “They said, ‘Y’all are under appreciated and don’t get paid nearly enough.’ I said, ‘Well, thank you, dude. These guys right here don’t get paid a penny.’ I had two volunteers in my boat.”

Volunteers Michael Fuller and Atley Davis picked up the group in the county’s boat.

The boat, purchased last year by the Lawrence County Board of Supervisors, has been used in two rescues and one recovery, Norwood said.

It’s 6.5-foot-wide and 17-foot long and can be used on any of the 62.2 miles of navigable water in Lawrence County.

It cost $28,500 for the boat, motor, trailer and battery and includes sonar, which can be used for locating drowning victims.

The court is now in session: 52 cases on docket for this week

The Lincoln County Circuit Court returns to session Thursday after a month-long summer break with dozens of cases on the... read more