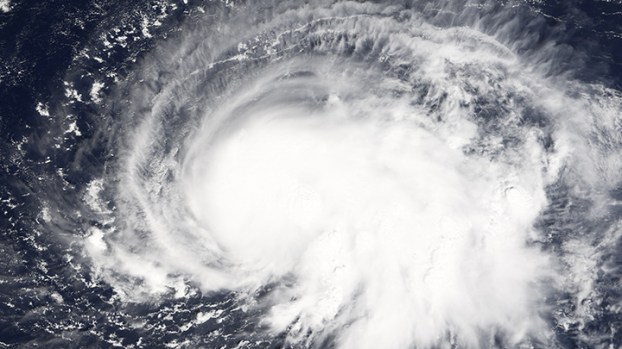 A hurricane forms in the Atlantic Ocean.

Hurricane season ain’t what it used to be.

And that’s a good thing.

Most of the major meteorological watchdogs tracking the 2018 Atlantic Hurricane Season have adjusted their predictions downward over the last 30 days, as ocean surface temperatures in the hurricane nest off the west coast of Africa have turned out to be lower than expected. Lincoln County Emergency Management Director Clifford Galey said his recent National Weather Service briefings have been all clear, and they’re expected to remain clear.

“As of Monday, they’re not expecting any storms to form in the next couple of weeks,” he said. “There hasn’t really been anything off the coast of Africa that’s concerned anybody, and right now it doesn’t look like there’s going to be for a while.”

Most hurricanes that affect the United States form in the warm waters off the coast of Africa and are carried westward on ocean currents. Scientists estimate ocean water must be around 80 degrees, down to a depth of around 150 feet, to produce and sustain hurricanes.

But temperatures produced by the National Oceanic and Atmospheric Administration’s National Environmental Satellite, Data and Information Service show that, as of July 31, Atlantic temperatures off the African coast are hovering in the mid- to high-70s. The lower-than-expected temperatures have been holding steady all summer.

Other factors have been holding off hurricanes this season, such as wind shear in the Caribbean that blows apart thunderstorms and regular clouds of dusty, dry air coughed up by the Sahara Desert that have crossed the ocean and brought hazy skies to Texas.

With all those hurricane-limiting factors in play, Colorado State University’s top-notch hurricane forecasters last month lowered the 2018 estimate down to 10 named tropical storms, four of which are predicted to become hurricanes. Preseason predictions by NOAA originally called for 10 to 16 names storms and five to nine hurricanes, with one to four being major storms of Category 3 or higher.

It hasn’t panned out. Subtropical Storm Alberto kicked off the season before the June 1 start date, hitting Florida on May 28 and bringing rain to Alabama and Tennessee. Hurricane Beryl briefly reached Category 1 strength in the middle of the Atlantic on July 6, but lost its power before crossing the Caribbean and turning north, out to sea.

Hurricane Chris briefly reached Category 2 status on July 11, but by then it was already riding the currents away from America and into the North Atlantic.

But, Galey pointed out, it’s not over yet. August and September are peak season for hurricanes, and conditions could change quickly.

“Right now, if a storm was to get in the Gulf, the waters there are warm enough for a buildup if it’s moving slow,” Galey said. “I don’t like to say we’re going to have a normal or an above-normal season — we just need to be ready and prepared, just in case. If we get one hurricane that’s going to affect us, that’s above normal for us.”

A printable preparedness checklist with recommended items is available for download at www.ready.gov.

“The danger is complacency,” Galey said. “The main thing is to be aware — watch the weather, be informed. Don’t wait until the last minute to be prepared. That’s when we see runs on gas stations, on grocery stores, and a lot of those items like radios, batteries and non-perishable foods, you can have most of that ready.”

Tripp Goldman’s grandma is sold on the new Walmart pickup service that debuted in Brookhaven Tuesday. Melissa Richie made her... read more